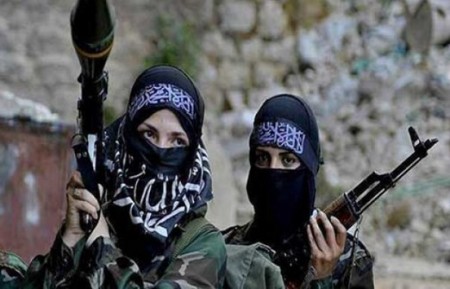 Shortly after the Sunni militant group the Islamic State in Iraq and Syria (ISIS) retook control of Raqqa earlier this year, it created the al-Khansaa’ Brigade, an all-female unit operating in the city. Its purpose is to apprehend civilian women in Raqqa who do not follow the organization’s strict brand of Sharia law, including a mandate that all women be fully covered in public and that they be accompanied by a male chaperone.

“We have established the brigade to raise awareness of our religion among women, and to punish women who do not abide by the law,” says Abu Ahmad, an ISIS official in Raqqa. “There are only women in this brigade, and we have given them their own facilities to prevent the mixture of men and women.”

He says the organization, which has been pushing further into eastern Syria after taking control of the Iraqi city of Mosul and key points on the Iraq-Syria border last month, needs a female brigade to “raise awareness among women, and arrest and punish women who do not follow the religion correctly. Jihad is not a man-only duty. Women must do their part as well.”

The women who join the brigade are either women of Raqqa who wanted to take part in ISIS’s activities there, or, often, the wives of mujahedeen who have come to fight from other parts of Syria or the region.

Though women are assuming new, more powerful roles across Syria – the U.N. now estimates that one in four displaced families in Syria has a female head –– residents here say that any “girl power” wrought by the brigade is mitigated by the harsher restrictions they have been tasked with imposing on Raqqa’s women.

“ISIS created it to terrorize women,” says Abu al-Hamza, a local media activist. He says the brigade raided the city’s Hamida Taher Girls School and arrested 10 students, two teachers and a secretary on the grounds that some of them were wearing veils that were too thin. Others were accused of wearing hair clips under the veil, pinning them in a way that showed too much of their faces.

Al-Hamza says that the women subsequently spent six hours in an ISIS detention center, where they were whipped.