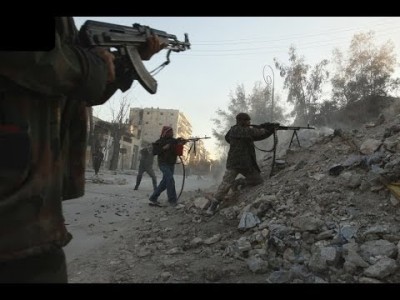 PHOTO: Insurgents fighting in Morek, near Hama, earlier this year

UPDATE 2045 GMT: Syrian forces tried again on Thursday to enter Morek, the town in Hama Province on the main highway between Hama and Idlib Province.

The ground attack was launched followed 15 airstrikes on the town. After fierce clashes, the invasion was repelled and regime troops withdrew to their former positions. There were significant losses on both sides.

A well-placed source says, “It was a hectic day with front lines changing back and forth hourly.”

On Wednesday, the Financial Times proclaimed, “Militants Push Anti-Assad Rebels Close to Collapse in Syria“. Patrick Cockburn of The Independent announced, “The Syrian army and Isis may…confront each other as the only important players left in the civil war.”

On the same day, Syria’s insurgents — far beyond the notice of either article — won a notable victory in the south, continued to punish Hezbollah in the southwest, and inflicted a defeat on regime forces near Hama.

A joint insurgent force with elements from the Islamic Front, the Free Syrian Army, and Jabhat al-Nusra overran the Brigade 61 base (see map) and took the nearby town of Sheikh Saad, northwest of Daraa city in southern Syria.

The haul of weapons included artillery pieces, support vehicles, and an unknown number of armored vehicles:

In the southwest, the battle between insurgents and Hezbollah continued in the Qalamoun region on the Lebanese border. The death of a Hezbollah commander, Bassam Ali Tabaja, was confirmed.

And in central Syria, insurgents repelled another attempt by Syrian forces to move into the key town of Morek, on the main highway from Hama to Idlib Province. At least 60 regime troops and militia were killed, and four tanks were destroyed.

The Syrian forces have tried for months to claim Morek to prevent insurgents from cutting off access to Idlib Province. If the regime is unsuccessful, its major bases in northwest Syria will be isolated and could be at risk of collapse.

The Local Coordination Committees reported that military helicopters were dropping barrel bombs on Morek on Thursday.

Fighting was reported on Wednesday for checkpoints near one of those bases, Wadi ad-Dief:

Facing attacks from the jihadist Islamic State, the largest of three regions in Syrian Kurdistan has adopted a law requiring six months’ of “self-defense” duty by all adult males.

The measure was approved by the legislative council in Qamishli in northeast Syria.

The Islamic State has taken a series of Kurdish villages in northern Syria this month and is threatening the city of Kobanê on the Turkish border.

The Islamic State has seized the al-Sha’er gas field in the Palmyra region of central Syria on Thursday.

Reports claim 23 guards were killed in the field, in which 340 people are employed. Twelve Islamic State fighters were slain, an activist linked to the group said, adding that “dozens” of defenders had died.

The Governor of Homs Province, Talal Barazi, said, “The (Syrian) army is trying to take (the field) back. There is fighting in the area and government air strikes.”

Video: Inauguration and Speech of President Assad on Wednesday