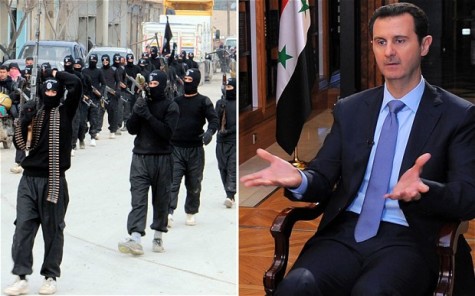 President Assad’s forces and the jihadist Islamic State have met in their first one-on-one ground battle in the 40-month Syrian conflict.

The pro-regime Al-Watan, citing a “military source”, wrote on Sunday of fighting over the al-Shaer gas field in the Palmyra district of central Syria.

The Islamic State, which already has control of oilfields in eastern Syria, moved into al-Sha’er last Thursday, killing scores of guards — a propaganda statement by the jihadist showed photos of 72 bodies. Syrian forces secured a nearby oilfield and counter-attacked on Friday.

Al-Watan said at least 60 troops have been killed in the attempt to reclaim the gas field.

The Islamic State was involved in insurgent victories over the regime last summer, notably at the Mennagh airbase in Aleppo Province. It was also prominent in an offensive in Latakia Province in western Syria and has held parts of Aleppo, Syria’s largest city.

However, since January the jihadist focus has been on a battle with the insurgency, in which it has lost most of its positions in northwest Syria but has advanced through the east.

The jihadists, who already control Raqqa in northern Syria, now face Assad’s troops in Deir Ez Zor in the east after insurgents withdrew from the city; however, no fighting has been reported so far.

Syrian warplanes have carried out occasional strikes on Islamic State buildings and positions in recent weeks. Activists had accused Damascus of a tacit alliance with the Islamic State, encouraging its assault on the insurgency.