Syria Video: The Refugees Who Danced to Pharrell Williams’ “Happy” 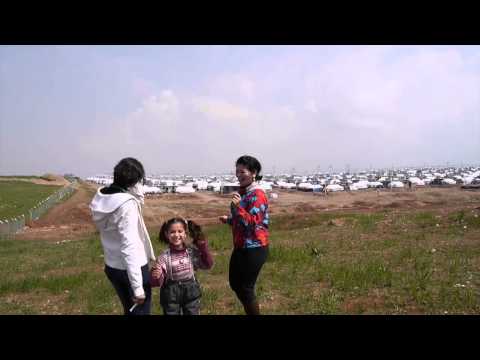 A contact on social media has pointed us to a “live” version of the video of Syrian refugees in northern Iraq dancing to “Happy”:

ORIGINAL ENTRY, MAY 23 Earlier this week, we wrote about the phenomenon of people celebrating their lives and communities by filming themselves dancing to Pharrell Williams’ “Happy” — beginning with British Muslims and spreading around the world, including Ukraine, Armenia, and Gaza.

We noted the downbeat twist in Iran, where six people involved in the “Happy in Tehran” video had been arrested and forced to admit their wrongdoing on State TV.

But that’s not the only way to stop Happiness.

We were going to write this morning about a sharp contrast to the daily news of violence, death, and deprivation in Syria — in the aftermath of the Iranian case, social media noticed that Syrian refugees in the Darashakran refugee camp in Iraqi Kurdistan had made their “Happy” version.

But when we went to YouTube to embed the video, we ran into this wall:

This video contains content from Talamasca M4W, SME, EMI Music Publishing, AdRev for a 3rd Party and UMPG Publishing, one or more of whom have blocked it on copyright grounds. Sorry about that.