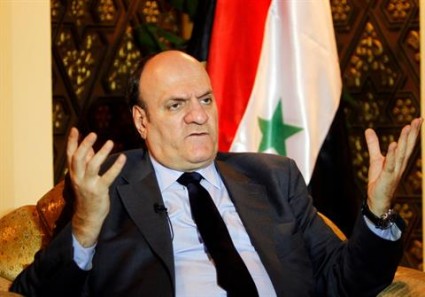 LATEST: Car Bombs in Homs Kill at Least 10 People and Wound At Least 53

For the first time, the website of the State news agency SANA has featured opposition to President Assad in the June 3 election.

The article depicts a meeting between one of two challengers to Assad, businessman Hassan al-Nouri, and members of the Homeland Party on Saturday.

Emphasizing the role of “patriotic opposition parties”, al-Nouri said he represents the “silent majority”: “He pointed out that his economic plans are different from those of other candidates, and that he has a special program for youths tackling family, education, and the serious problems caused by the crisis.”

The candidate also “criticized the wide authorities given to the President and the specification of the President’s religion, calling for injecting a little secularism to the constitution by separating religion from state”.

Al-Nouri said that he decided to stand for the Presidency in December when a Western journalist “provoked him” in Poland “by asking him if he dared run”.

On Tuesday, al-Nouri used an interview to the French news agency AFP to chide Assad for mishandling the start of the protests in March 2011: “Today there is a nationwide war and a foreign plot, but in the beginning, people took to the streets to demand rights. We mustn’t forget that. A lot of things could have been avoided.”

See A Challenger Criticizes Assad Over Start of Protests

A car bomb in the Zahra district of Homs on Sunday killed at least 10 people and wounded more than 40, according to a regime official.

Zahra has been under regime control during the fight for Homs since 2011. Earlier this month insurgents finally agreed to evacuate almost all of their areas in Syria’s third-largest city.

Syrian officials also said an explosion hit the outskirts of Homs, on the road heading west toward the city of Tartous on the Mediterranean coast. They said at least 13 people were wounde.

The Islamic Front and Jabhat al-Nusra are involved, with Jabhat al-Nusra blowing up four checkpoints in suicide operations. Many tanks were reportedly damaged or destroyed, and insurgents chased fleeing militia.

The activists said two airstrikes were followed by mortar shelling.

Arrival of the convoy in Douma:

One of the airstrikes:

Syrian forces hit Mleha, to the east of Damascus, with at least eight air strikes and surface-to-surface missiles, as the regime continues to press the “gateway” to the insurgent-held East Ghouta area.