Syria Daily, May 20: Resisting the Islamic State of Iraq in Manbij 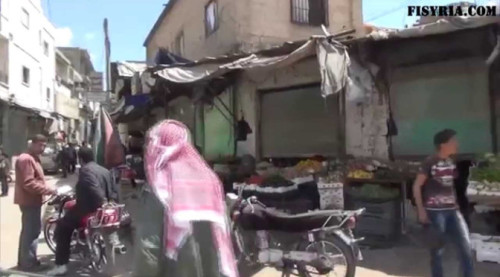 Amid fighting between insurgents and the Islamic State of Iraq and as-Sham, the Iraqi-led group faces another challenge to its local rule — the protests of citizens.

The strike is protesting a series of alleged ISIS abuses, including the execution of two young men accused of rape, hanging their corpses from a tree.

Some activists have claimed that ISIS opened fire on one of the demonstrations calling for their withdrawal, wounding three people.

ISIS took Manbij, about 90 kilometers (56 miles) northeast of Aleppo city, in early December 2013. They have remained despite being ejected from almost all of their positions in Aleppo Province by insurgents since January.

Russia: We Will Veto UN Resolution to Refer Syria to International Criminal Court

Russia has said it will veto any United Nations resolution to refer the Syrian conflict to the international Criminal Court.

“The draft that has been submitted to the UN security council is unacceptable to us, and we will not support it,” Deputy Foreign Minister Gennady Gatilov said on Tuesday. “If it is put to a vote (in the UN Security Council), we will veto it.”

France circulated the proposal in April after briefing the Security Council on photographic evidence, provided by a defector, of the abuse and killing of 11,000 detainees by the Syrian regime. Almost 60 countries, led by Switzerland, appealed to all 193 UN member states to co-sponsor the resolution authorizing the ICC to investigate allegations of war crimes by the regime, pro-Assad militias, and insurgents.

The Council is expected to vote on Thursday.

Insurgents Claim Downing of Helicopter in Fighting Over Mleha, Near Damascus

Insurgents have claimed another setback for the seven-week regime assault on Mleha, a key town to the east of Damascus.

The Islamic Front has posted a video of the attack.

The town is the gateway to insurgent-held areas of the East Ghouta region.

Continuing its counter-offensive to regain territory taken by insurgents in recent months in southern Syria, Syrian warplanes bombarded a series of towns in Daraa Province on Monday.

Regime troops and insurgents fought on the western side of Ataman and near Nawa, north of Daraa city.

There were also clashes to the west in al-Qahtaniya in Quneitra Province, claimed earlier this month by insurgents.