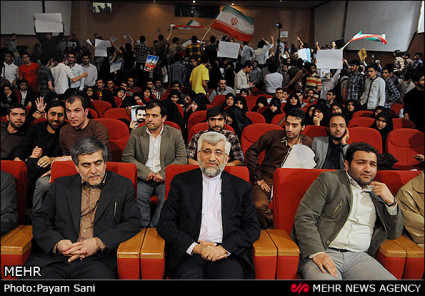 President Rouhani is moving towards the comprehensive nuclear agreement with the 5+1 Powers, but this week brought more challenges on the home front over political and social issues.

Tehran and the 5+1 (US, UK, France, China, Russia, and Germany) announced expert-level talks in New York in May, just ahead of the next high-level round of negotiations in Vienna.

Iranian officials reinforced the image of progress with statements about their conversion or dilution of 20% uranium stock, complementing their suspension of production under the interim nuclear deal, and willingness for a re-design of the Arak heavy-water nuclear reactor. They also indicated that the International Atomic Energy Agency could continue inspections of the Parchin military base, which Western countries suspect has housed a high-pressure containment chamber that can be used in a nuclear weapons program.

But while Rouhani continues to be shielded by the Supreme Leader’s support from criticism of his nuclear engagement, he has no such cover for his efforts at cultural “openness” and easing of conditions for political prisoners.

The Revolutionary Guards issued another pointed warning that they would not be silent, defying Rouhani’s injunction to stay out of politics. The judiciary warned that Iranians returning from self-imposed exile could be arrested for “sedition”, undermining the President’s call for safe return. And the Supreme Leader countered questions over Iran’s approach to human rights with pointed remarks about American sins such as the Waco killings of 1993.

The tension broke out in public in an indirect clash between Ayatollah Khamenei and Rouhani over women’s rights. On Saturday, the Supreme Leader denounced the presentation of “equality” and said the priority was for women to stay at home. On Sunday, the President countered:

There was also a show of protest from students at a Tehran university, as they challenged hardline politician Saeed Jalili’s speech with chants for nuclear engagements and freedom for political prisoners, including opposition leaders Mir Hossein Mousavi and Mehdi Karroubi.

On the economic front, the Government is bracing itself for reactions as it introduces an economic recovery program which includes a second phase of subsidy cuts. Rouhani and his officials assured that the measures would not re-ignite inflation, but observers suggested that Iranians would circumvent the attempt to restrict support payments.

The next month is likely to bring the contrast of a successful President abroad and an embattled one at home. Talks are moving towards a comprehensive nuclear agreement, but high-level officials — including the Supreme Leader — will continue sniping at the President to ensure he does not try and advance his program for political, social, and cultural changes.

As long as the nuclear discussions remain on course, Rouhani’s position will be safe. However, if the talks run into trouble, the President’s critics will be buttressed in their challenges to his authority on other matters.

The “wild card” in the contest is Iran’s economic position after the Government’s subsidy cuts plan is implemented. Protest amongst the public could well focus on the status of their bank accounts rather than political prisoners and “rights”.