Iran: “Like Abu Ghraib” — The Beating of Political Prisoners in Evin’s Ward 350 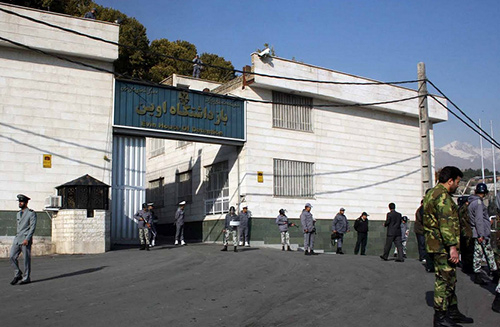 Last Friday we reported the beating of political prisoners in Ward 350 of Evin Prison after they protested “an aggressive inspection program”.

The opposition website Kalemeh said, “More than 30 prisoners were injured and at least four inmates were taken to a hospital outside the jail because they were bleeding or sustained fractures.” At least 32 prisoners were transferred to solitary confinement.

Iran Wire follows up with the comments of prisoners’ relatives, who were finally allowed to visit on Monday. The families spoke of “seriously wounded inmates in a visiting hall that resembled a hospital ward, strewn with battered bodies in casts and bandages”.

When I entered the visiting room, my heart almost stopped. I was overcome with nausea.

Some prisoners in the hall had broken legs and a prisoner’s hand was bandaged. The neck of (detainee) Akbar Amini was in a cast, broken. When his mother saw him, she fainted and was carried out of the hall.

My husband told me that on Thursday the cell block resembled Abu Ghraib (the notorious Iraqi prison where American occupiers abused detainees after the 2003 War).

There are prisoners who have been injured but don’t dare to go to the clinic. They’re afraid that if they do they will end up in solitary.

Authorities continue to deny any incident, following the declaration of the head of the Prisons Bureau, Gholam-Hossein Esmaili, “There were no clashes or beatings by our colleagues. They did not even touch them.”

Sohrab Soleimani, director-general of prisons of Tehran Province, cautioned, “We should not pay any attention to the rumors spread by counter-revolutionaries.”

And MP Mehdi Koochakzadeh insisted after seeing the families, “They had no reliable news about the beatings. They only said that they had heard about it from the BBC Persian Service.”

If you deny the reports then how come you were not present at the visiting hall today? Why don’t you allow an MP to visit the prison? Who is behind this?

MP Ali Motahari, who has called for an explanation of the events, has not been allowed into Ward 350.

When they pulled up the curtains and we saw our relatives, everybody started weeping.

The prisoners told us that the violence was very intense. They are on hunger strike now, demanding that the laws be respected. They did not deserve to become the targets of the officials’ rage.

More than 70 prisoners have written a letter of protest, and 12 are refusing food.

Hossein’s hands were slightly injured, but the others were in very bad shape. They had torn the guys apart. They had injuries on their heads, on their ears and on their necks. They threatened that next time they would kill them.

Whatever the officials have said about Thursday is a lie. They don’t take the prisoners to the hospital because they are afraid that others would witness what shape they are in.