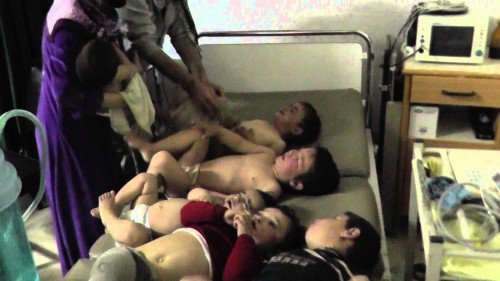 Activists and opposition groups, supported by footage, claim that Syria’s military used “poison gases” on Friday in attacks near Damascus and in Hama Province.

The Local Coordination Committees claimed six people had been killed in the attacks. Multiple videos show victims being treated.

The opposition Syrian National Coalition denounced the Harasta attack. It said the assault followed other uses of the gas near Damascus — including Darayya, Harasta, and Jobar — in the past two weeks, and declared, “The international community has a moral duty to voice its rejection of this crime and indeed take immediate firm steps to restrain a regime that is prepared to use all kinds of conventional and unconventional weapons to cling to power.”

Sources have said that the Syrian military might be using a mix of diluted chemical toxins and tear gas.

Assad forces have been pursuing an offensive this month to clear insurgent-held areas near Damascus, with heavy fighting and airstrikes reported in Jobar and in part of East Ghouta.

Syrian State media has acknowledged the use of chemical weapons in Kafrzita, but has blamed the Islamist faction Jabhat al-Nusra Front.

They claimed Jabhat al-Nusra was planning chemical attacks against the Wadi Deif area in Idlib Province in northwest Syria, as well as another area in Hama.

Videos showed claimed victims after a “yellow-tinged cloud” from an airstrike on Kafrzita in Hama Province:

The scene after the airstrike:

Victims being treated after attack: