Syria: The Damascus Shrine at the Heart of the Conflict 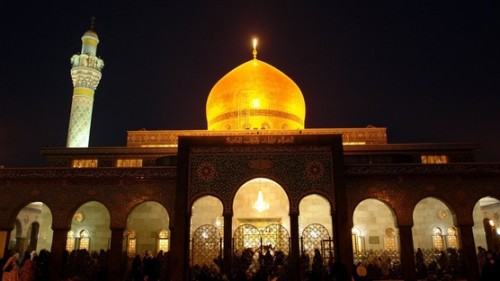 Anne Barnard of The New York Times visits the Sayyeda Zeinab shrine in southern Damascus — a symbolic center for both the Assad regime and their allies from Hezbollah and Iran:

This cinder-block town near Damascus, once a hub of prayer and commerce open to the world, seems like a tightly guarded military zone.

Inside the revered shrine here, under ceilings sparkling with mirrored tiles, men and women still pray, pressing their faces to the tomb they believe holds the remains of Zeinab, a granddaughter of the Prophet Muhammad. But the streets outside, once impassable with pilgrims and shoppers, are now sparsely trafficked. Gone are the chattering picnickers who packed the shrine’s blue-tiled courtyard, now crisscrossed by armed men in unmarked fatigues.

Some, amid a sense that immediate danger has passed, display a jaunty good mood. In the courtyard recently, a man in digital-print desert camouflage like that of the United States Marines strode up to a visitor and put out his hand.

“I’m from Hezbollah,” he said.

The unofficial introduction — from a member of a reflexively discreet organization — reflected a new openness in Syria about the government’s foreign backers, as fighters with Hezbollah, the Lebanese Shiite paramilitary group and political party, grow more assured that they are helping to beat back insurgents.

As Syria convulsed in conflict, the thought that the shrine could be destroyed alarmed the faithful. Zeinab, who lost her brothers and sons in battle and came to Damascus as a prisoner, has long been honored, particularly by Shiites, as a symbol of sacrifice and steadfastness.

Religious fervor helped galvanize tens of thousands of Shiite fighters to flock from Iraq, Lebanon and across Syria, in theory to defend the shrine, in practice to fight alongside Syrian forces on many fronts. And it drove some Sunni extremists in the insurgency, who regard Shiites as infidels, to declare the shrine a target.

It has survived, but at a price.

It is presided over, in part, by foreign fighters whose role deeply divides Syrians — some effusively grateful, others enraged. And Zeinab’s story of mourning and displacement resonates anew with daily life here. Insurgent mortars have killed civilians nearby, including children. Government bombardments have shattered insurgent-held neighborhoods, followed by bulldozers leveling damaged buildings to eliminate snipers’ nests.

At the shrine, a shell chipped the minaret, and last month another clattered into the courtyard during prayers. That it did not explode is regarded as a miracle; one woman said she had seen it come to rest rolled in a prayer rug.