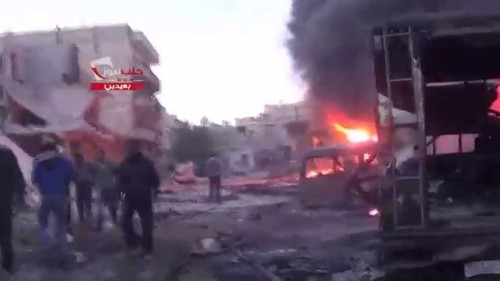 LATEST: US — “Indications” of Chemical Attack on Kafrzita Earlier This Month


The Syrian military responded on Sunday to insurgent offensives in and near Aleppo with barrel-bombing of insurgent-head areas of Syria’s largest city.

The exact casualty figure is unknown, but activists said scores died in the attacks. The Local Coordination Committees recorded the deaths of 59 people in Aleppo Province on Sunday, out of 107 across Syria.

Attacks were reported from the Old City, Hanano, Kafr Hamra, Ashaar, and al-Halak. al-Jandoul, and al-Firdous. Graphic video showed bodies being pulled from fires in the Ba’edin district.

Since December, several hundred civilians in Aleppo have been killed by the explosive cylinders, usually dropped by helicopters, used by the regime.

The latest assaults come as insurgents press the Syrian military with advances to the northwest and south of Aleppo and attacks on regime positions in the center.

US: “Indications” of Chemical Attack on Kafrzita Earlier This Month

The US State Department has said that it believes a town in Hama Province was attacked with chemical toxins 10 days ago, and that it is investigating whether the Assad regime carried out the assault.

Spokeswoman Jen Psaki said on Monday, “We have indications of the use of a toxic industrial chemical” in Kafrzita.

“We are examining allegations that the government was responsible,” she told a news briefing. “Obviously there needs to be an investigation of what’s happened here.”

The US ambassador to the United Nations, Samantha Power, said just after the attack that claims were “unsubstantiated”.

Doctors and witnesses reported chlorine gas being spread from cylinders inside barrel bombs, killing at least three people and wounding at least 200.

The Syrian regime has set the date for President Assad’s re-election for June 3.

Announcing the election on State TV, Speaker of Parliament Mohamed Jihad al-Laham said requests for nomination would be accepted until May 1. Voting for Syrians outside the country will take place at Syrian embassies on May 28.

Residency requirements bar many of Assad’s potential opponents from standing in the contest.

Unsurprisingly, opposition groups said the process would be a cover for Assad’s retention of power. Monzer Akbik of the Syrian National Coalition said:

This is a state of separation from reality, a state of denial. He didn’t have any legitimacy before this theatrical election and he will not after.

We do not know what actor he is putting up as an opponent but we are not taking this seriously.

The outlets say 11 fighters from Jabhat al-Nusra followed up a car bomb to grab food and juice. 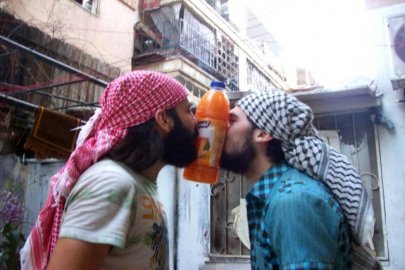 Reports on Sunday indicated the regime launched airstrikes on Jub al-Jandali after insurgents moved into the western half of the neighborhood.

The Syrian regime has stepped up shelling on opposition-held areas, including the Old City, as it pursues a ground offensive to push out insurgents after more than two years.

State news agency SANA reports that five people were killed on Monday by a pair of mortar shells near the Parliament building in central Damascus.

Claims are circulating that the Islamist faction Jabhat al-Nusra has carried out its first suicide bombing against the Islamic State of Iraq.

Jabhat al-Nusra had refrained from involvement in fighting between ISIS and insurgents since January. However, it harshly denounced the Iraqi-led group last week after its commander in Idlib Province and his family were murdered by gunmen.

Video: Appeal from an Insurgent in Homs

An insurgent in Homs posts a video message, denying that regime forces have taken opposition-held areas of the city in their ground offensive:

Syria | An Important Message to Media from One… by SRLW

Footage of an Islamic State of Iraq and as-Sham training camp for foreign fighters from the North Caucasus:

Joanna Paraszczuk gives detail and analysis of the camp for the Russian-speaking fighters. It is run by Abu Ibrahim Shishani, who declares:

Our aim is to liberate this land…and raise the word of Allah.

If each of us did what he could, the Jihad would go very easily.

Forming a distinct group within ISIS, the jamaat presents itself as a community through footage of children dressed in military clothing and holding weapons: 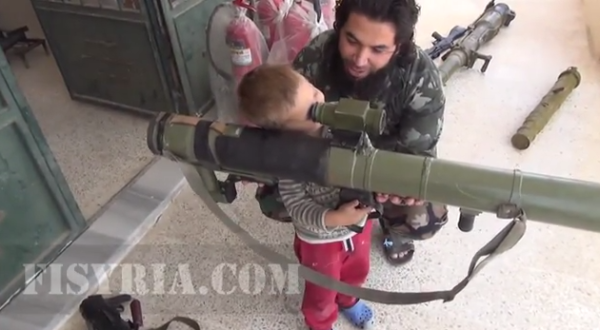