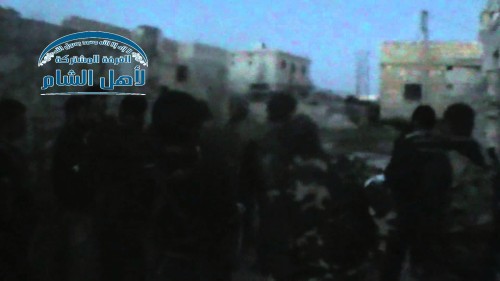 UPDATE 1225 GMT: Insurgents claim they control the highway near the Ramouseh industrial area, south of Aleppo, cutting off the only route to the city for the Syrian army and militias.

Cutting off Al-Ramusah Road (the only support road for the Assad forces inside #Aleppo), and fierce clashes in Al-Ramusah districts

If insurgents maintain control, they will also cut the main route from the airport to supply regime bases east of Aleppo.

Insurgents are pursuing a notable victory — the capture of an Air Force intelligence headquarters near Aleppo.

The opposition have surrounded the building last month after moving into Layramoun. Defense of the building has been further hindered by insurgent advances in other areas near Aleppo and their attacks in Hama Province, cutting off regime reinforcements.

On Thursday, the Islamic Front declared the seizure of several other buildings close to the headquarters, including the Red Crescent facility.

According to sources, the building, the most fortified area in northwest Aleppo, holds a large number — believed to be in the thousands — of detainees. As it is an important command-and-control center for regime forces, its loss will pose a significant problem for the Assad troops are fighting insurgents in Syria’s largest city.

Fighting around the Air Force headquarters:

With the capture of Layramoun, opposition forces are also threatening the regime-held villages of Zahraa and Nubl to the north. They have taken areas to the southwest of Aleppo, notably Aqrab, as they try to capture five military targets and cut off roads used by regime forces. They are also continuing to resist the efforts of the Syrian military to take the Sheikh Najjar industrial area to the east of the city.

Sources, noting the recent advances, say the regime could be in its most vulnerable position in Syria’s largest city in months. They say the best hope for Assad forces now could be a big attack on insurgents by the Islamic State of Iraq and as-Sham, who hold parts of east Aleppo Province and Raqqa, Syria’s largest city outside Assad control.

Aleppo has been in a military stalemate since July 2012, when insurgents entered the city. Opposition forces hold eastern neighborhoods, while regime troops control the western section.

Activists: At Least 4 Injured by “Poison Gas” Attack in Harasta

Activists are claiming casualties from a regime “poison gas” attack in Harasta, northeast of Damascus:

There have been persistent reports of regime use of the poisonous gas — possibly from a dilution of chemical toxins and tear gas — in their operations near the capital over the past month, as the Syrian military tries to clear out insurgent-held areas.

The Friday protest in Kafranbel in northwest Syria, known for its iconic posters, has another message for President Obama: 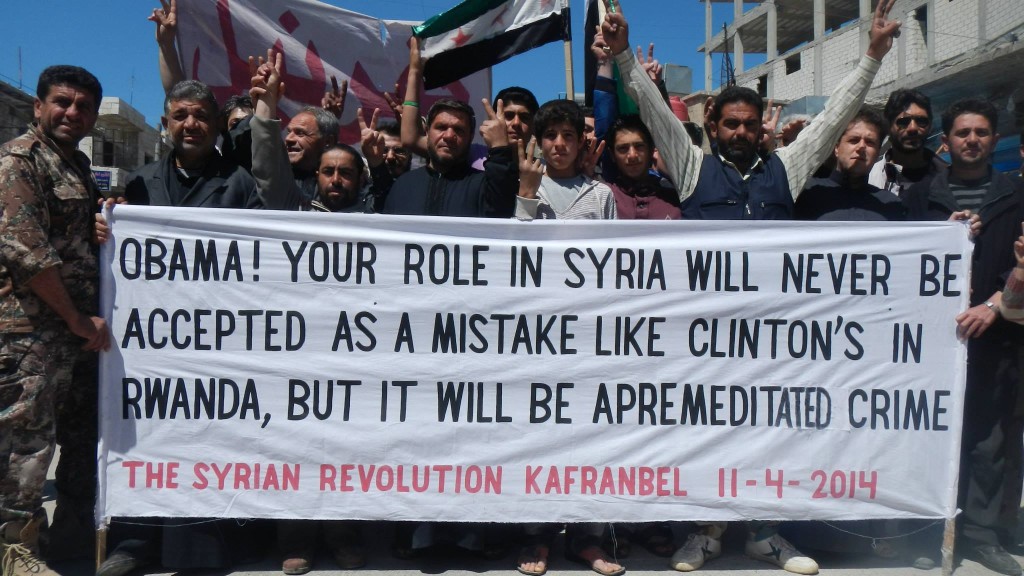 From Aleppo, a simple appeal: 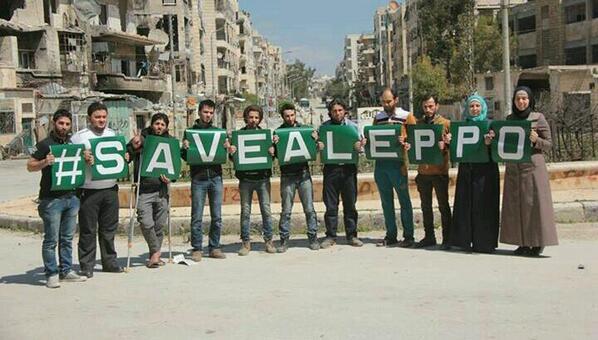 A video tour of Manbij, a town in Aleppo Province taken by the Islamic State of Iraq from insurgents early this year:

FiSyria, a site sympathetic to ISIS, hails their rule in Manbij:

In the city every day there are improvements for the better, Praise be to Allah!

On the streets you barely see people smoking and selling cigarettes. Group prayers are performed at a set time, and shops are closed. Women began to cover their faces and hands.

Poor people come here from different places for help and ISIS in turn provides them with shelter and food. There are electricity and running water in every home, and where there is not, then the problem is dealt with.

The Jordan Times claims, from “Islamist sources”, that a prominent Jordanian Salafist is trying to broker a reconciliation between the Islamic State of Iraq and as-Sham and the Islamist faction Jabhat al-Nusra.

The sources say Saad Al Huneiti is in Aleppo to seek consensus over the formation of a joint Sharia court to rule on disputes between the groups. Before arriving in northern Syria late last month, Huneiti travelled across Saudi Arabia to gain the backing of top Salafist clerics, the sources say.

The two groups fell out last spring when ISIS tried to claim supremacy within the fight against President Assad. Jabhat al-Nusra claimed it had legitimacy, because of its connections with local groups and residents, and appealed to Al Qa’eda head Ayman al-Zawahiri for a resolution.

Al-Zawahiri issued an edict in favor of Jabhat al-Nusra, but the efforts of his envoy, Abu Khaled al-Suri, to broker the dispute failed. ISIS broke from Al Qa’eda early this year, and al-Suri was killed in an ISIS attack on an Aleppo headquarters.

The bid comes less than two months after the failure of the so-called “Al Umma initiative” by Saudi cleric Abdullah Al Muheissini to establish an umbrella Sharia court to look into disputes among the various jihadist and Islamist militias fighting in Syria.

Video: Islamic State of Iraq and Insurgents Each Claim Victory in Abu Kumal in Northeast Syria

There are conflicting accounts of the outcome of a fight for Abu Kumal in northeast Syria.

The Islamic State of Iraq and as-Sham claims it has scored a notable victory over insurgents. However, video posted on YouTube claims to show supporters of the insurgency celebrating the repulsing of the ISIS attack, pushing the “Kharijites” out of the town:

Abu Kumal has been held by anti-Assad forces since November 2012. Its capture would be a significant victory for ISIS, who have been pushed out of other areas in northern and eastern Syria since their battle with insurgents erupted in January.

The Local Coordination Committees report a spike in deaths on Thursday, with 131 people killed.

The LCC said 60 people were slain in Deir Ez Zor Province, including 30 who were discovered in a mass grave after they were killed by the Islamic State of Iraq and as-Sham.

In Aleppo Province, 25 people were killed, while 21 died in Damascus and its suburbs.