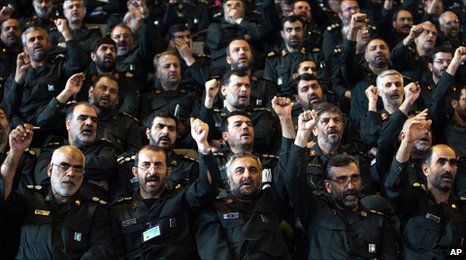 Iran’s military, which has a major role in the country’s economy, defended its position in a series of statements on Thursday.

The head of armed forces, General Hassan Firouzabadi, said at a ceremony for the Army’s war dead:

We have economic work and perform a role in the economy. The armed forces will enter and perform its duty, if necessary, in supporting the administration….We have raised this issue with officials and First Deputy to the President and have announced our preparedness to support the administration.

Firouzabadi’s statement appears to be a caution to President Rouhani, whose Government is considering further privatization of State companies and interests, not to take away the military’s companies and projects. The commander assured, “The armed forces has not intervened in the private sector. They do projects that either lack contractors or could make use of…technology.”

The Revolutionary Guards, Iran’s elite military force, is a leading player in construction, logistics, and engineering through its Khatam al-Anbia branch, and it also hold a large share in many Iranian companies. The extent of its involvement in the economy is not declared, but Western observers have claimed in the past that it ranges from 1/3 to 2/3 of Iran’s GDP.

President Rouhani assured the Guards last autumn that, in return for staying out of political affairs, it would retain its major economic interests. However, Guards commanders have continued to make wary comments upholding their position in the economy.

On Thursday, the deputy head of armed forces, General Massoud Jazayeri, announced the formation of a working group to carry out the Supreme Leader’s “Year of Economy and Culture, with National Determination and Jihadi Management”.

Jazayeri said, “Executive and operational organizations have taken shape, and we hope to implement the Supreme Leader’s strategy.”

The Tehran Friday Prayer has reasserted Iran’s right to a nuclear program and again denounced the European Parliament over its resolution on human rights in Iran.

Ayatollah Mohammad Emami Kashani told the audience, two days after the close of the third round of talks with the 5+1 Powers on a comprehensive nuclear agreement:

The Iranian nation is entitled to peaceful nuclear energy, and as the Leader of the Islamic Revolution said, it will never be possible to back down.

It is the right of the nation and (this) must go ahead in all dimensions and directions.

Last week’s prayer criticized the European resolution as unwarranted interference in Iranian affairs, and Emami Kashani said today that it was “invalid”: “This resolution stems from their arrogant nature and it is of no value.”

1 American Scholar Gets Honor, Another Gets Desecration in Iran

A tale of contrasting treatment of Americans who have been prominent in Iranian history….

MP Ali Motahari has called on the Government to issue a permit to allow Richard Nelson Frye, the recently-deceased American expert on Iranian and Central Asian Studies, to be buried in Isfahan.

Addressing the Parliament, Motahari asked for the burial of Frye beside the Zayandeh River, as the scholar requested in his will.

Some opposition has been expressed by MPs who claim Frye is a US spy: Ahmad Salek, the Isfahan representative and head of Parliament’s Cultural Commission, has challenged the burial, but Motahari claimed Commission — of which he is a member — is not united in this refusal.

Frye is credited with establishing the first Iranian studies program in the US at Harvard University.

Meanwhile, another US scholar has not fared well in public memory this week:

Hardliners violate tomb of famous US Iran scholar Arthur Pope in Isfahan: "the American monument must be destroyed!" http://t.co/aCOLgmsaWe

Pope, editor of the authoritative Survey of Persian Art, was the leading scholar on Iran in the US from the 1920s until he moved his Asia Institute to Iran in the 1960s. He and his wife Phyllis Ackerman, a fellow scholar, are buried on the bank of the Zayandeh River in Isfahan.

A letter signed by more than 100 MPs will be delivered to the head of the Islamic Republic of Iran Broadcasting calling for the inclusion of critics of the Geneva Accord on Iran’s nuclear programme in national television, according to MP Behram Biranvand.

Biranvand claimed it is essential to allow participants “to criticize this accord.”

In recent months, there has been friction between IRIB, in particular its head Ezzatollah Zarghami, and the Rouhani administration.

The Director at the Planning and Development Department at Iran’s National Petrochemical Company, Hossein Shahriyari, has revealed plans to increase Iran’s petrochemical exports to $12 billion.

Shahriyari declared that “In recent years, the domestic sales of petrochemical products have increased considerably and with the implementation of the new development projects, the petrochemicals production capacity will rise significantly.”

He did, however, admit that Iran’s petrochemical sector needed a further investment of $33 billion to boost the growing industry, which he claimed could potentially make $26 billion.

Earlier this week, the Secretary-General of the Organization of the Petroleum Exporting Countries (OPEC), Abdullah al-Badri, welcomed the prospect of an increase in Iran’s oil exports.

“There is no problem for OPEC to absorb any production increment from Iraq and Iran in 2014,” he said.

The critical reaction to the recent resolution on the human rights situation in Iran by the European Parliament continues as Commander Maj. Gen. Ataollah Salehi condemned the EU’s intervention.

Salehi declared “We consider the enemy’s threats to be similar to shouting while moving backwards, not forward. The enemy has been defeated and has not achieved its goals, whether in the arena of assassination, irregular or regular warfare.”

Hamid Aboutalebi, Iran’s proposed Ambassador to the United Nations, has joined Twitter, using his first tweet to complain about US objections to his request for a visa: “The United States has devised a new procedure and path in that national parliaments can breach a country’s international commitments through legislation.”

Iran candidate for U.N. ambassador @DrAboutalebi complaints on twitter over US control over UN following Senate refusal to give him visa.

Commenting on the visa issue, Foreign Ministry Spokeswoman Marzieh Afkham announced “We have formally stated that the treatment of the representative of the Islamic Republic to the United Nations is not acceptable, and Dr. Hamid Aboutalebi is the most qualified diplomat in the Islamic Republic, with diplomatic experience in Italy, Belgium, and Australia and in the 70s received an official visa from the United States to attend the UN.”

Some American politicians have objected to Aboutalebi’s nomination because of his alleged involvement in the 1979 Iran Hostage Crisis; Aboutalebi insists he only acted a translator for the hostage takers on a few occasions.

Interior Minister: “We Do Not Accept Kidnapped Border Guard is Dead”

Interior Minister Abdolreza Rahmani Fazli has said, that, despite the release of four kidnapped border guards by the Sunni insurgency Jaish al-Adl, Tehran believes that the fifth kidnapped guard is still alive.

Speaking to reporters, Fazli stated: “By no means do we accept that Jamshid Danaeifar has been martyred and the Pakistani government and those who were responsible should be accountable.”

Head of Armed Forces: We Help Government Where “Doomed Necessary”

An unintentionally humorous perspective from Fars News, the outlet of the Revolutionary Guards, as it tries to put a positive spin on the military’s caution to President Rouhani not to interfere with its role in the economy….

The outlet reports on the speech by the head of the military, General Hassan Firouzabadi: “Iran’s Armed Forces have so far participated in several state development projects, including construction of highways, bridges, dams and power plants which could not be carried out by other sectors.”

It adds, “He reiterated that the armed forces would help the government in any activities if doomed necessary.”