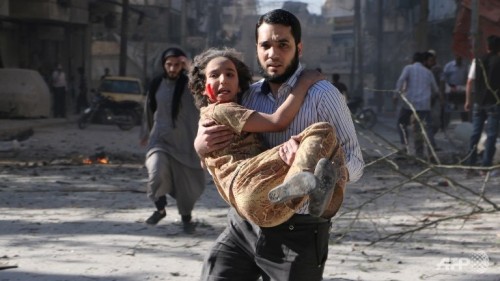 The BBC’s Ian Pannell and Darren Conway, the first Western journalists to get inside insurgent-held areas of Aleppo this year, report from the city:

(We) witnessed the devastating effects of air bombardment on Syrian civilians after gaining rare access to rebel-held areas of Aleppo.

Emergency rescue teams told the BBC the city was living in “danger and fear”.

Thousands of people are reported to have been killed or maimed in a campaign of aerial bombardment in northern Syria this year….

“My husband was sitting at breakfast. We heard the first blast: it sounded far away. But I asked him to go and get the kids off the street. And suddenly it hit us.”

Um Yahya wept. With two small children at her side, the young mother was standing in what until that morning had been her home. It was now a wreck: a tangle of rubble and cables and dust, with half the ceiling missing and parts of the building completely razed.

Consumed by shock and grief, she described the moment the barrel bomb landed on her street. “It was as if someone picked me up and threw me inside”.

Her husband, who had gone to find their children, was badly injured and had been whisked off to hospital. Her parents have fled to Turkey and she is now alone with her children. “I have nowhere to go,” she said. “I just want my husband and nothing else.”

Outside, the emergency rescue team of the Civil Defence Force (CDF) scoured through the rubble. With little training and limited equipment from Britain, America and elsewhere, theirs is a task as grim as it is dangerous.

When there is an attack on residential areas, they race in to search for survivors and – as often as not – to recover bodies.

In the last year, eight crew members have been killed as they brave bombs and bullets to rescue others.