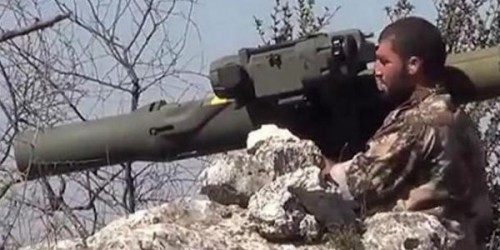 The appearance of the first US-made TOW anti-tank missiles in Syria is followed this morning by a PR boost for one of the factions receiving them.

Awda puts out the essential line that Harakat Hazm has “moderate views and, just as important,…discipline”. The Post eagerly endorses the message: “The men entrusted with the first American missiles to be delivered to the Syrian war are engaged in an ambitious effort to forge a new, professional army.”

The group, little-known before the appearance of one of the TOW missiles in their hands in a YouTube video, is based in Idlib Province in northwest Syria.

The US has not formally acknowledged supporting, let alone delivering, the missiles but has put out the line that it is ready to aid any “moderate” insurgent faction.

Washington has been accused for months by insurgent groups and the Syrian opposition of restricting or even blocking military aid.

Awda said only that “friends of Syria” had provided the missiles but said that the US had supported the delivery. Local American officials in the region confirmed that phrasing.

Harakat Hazm is one of three groups seen with the TOW missiles in northwestern and southern Syria. Another of the three, the Syrian Revolutionaries Front, is also being promoted as “moderate” in an ambitious PR campaign in both the region and in Washington.

In contrast to the SRF’s Jamal Maarouf, whose background is filled with accusations of profiteering, Harakat Hazm’s Awda has a clean record — the group was only formed in January.

With his long hair tucked under an olive cap and his short beard, Awda comes across as a throwback to the kind of rebel who dominated the fight before foreign jihadists and al-Qaeda surged onto the battlefield. His resolutely on-message proclamations of support for democracy match the views that the United States has said it wishes more Syrian rebel fighters would embrace.

Indeed, there is a link between Awda and the SRF which may cause tension in the current PR campaign promoting US support of both groups — the commander broke from the SRF to form Harakat Hazm:

Awda said he was uncomfortable with the indiscipline of Maarouf’s group, which has acquired a reputation for racketeering and thuggery. “Jamal Maarouf is a warlord, and we reject warlords,” Awda said. “He is a good man, but he is civilian and we are military.”