Syria 1st-Hand: The Ceasefire in Damascus Suburb of Barzeh — “The Opposition Had No Choice” 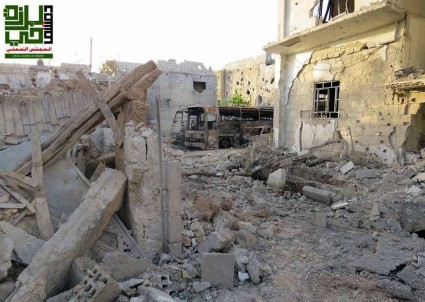 In January, the Syrian military agreed a series of ceasefire with insurgents in Damascus suburbs.

While the halts in fighting have been under strain in some of the suburbs, the ceasefire in Barzeh has held, with State media proclaiming “reconciliation”. Activists say the agreement was only reached after the months-long siege of the regime’s “surrender or starve” policy.

Q: What can you tell us about conditions in Barzeh since the ceasefire was signed?

Life in the neighborhood has returned to normal since the ceasefire took effect. Shelling and all sorts of military operations have stopped, and the electricity, water and communications networks are back. People have started returning to the homes that they left.

Q: What are the conditions that have allowed Barzeh’s truce to succeed?

It has succeeded because of the long planning that went into it — the government had been designing this ceasefire for more than five months. Also, most of the opposition forces present here are natives of the area. Neither side has violated any condition of the agreement.

Q: Can you elaborate on why you think neither side has violated the truce?

The opposition has been left with no other choice. Support for Barzeh has essentially vanished, whether medically, militarily, or in terms of food, and the media center there is extremely weak — it can’t convey the reality there, the magnitude of the destruction. The intense siege left them with no choice but to accept reconciliation and abide by it.

As for the regime, the first point is that in Barzeh, like all other areas, the regime wants to relieve itself of an active front while also presenting itself in a positive light in front of the international community. The second and more important point is that the regime wants to secure the Tishreen military hospital, which is considered the most important military medical installation in the region, and which rebels have exhausted with continuous attacks.

It also wants to secure the routes to Dahiyat al-Assad and Esh al-Worour, which are of great importance to the regime because they’re completely loyal to Damascus and because most of their residents are Alawites. It also has officers’ quarters.

Q: What are residents’ priorities as they return to Barzeh?

The neighborhood has been subjected to massive destruction over the past year — there’s no street or home that hasn’t been shelled. So most people are repairing or rebuilding their homes.