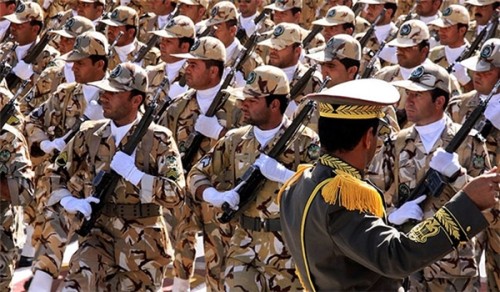 Iran is displaying military strength on National Army Day, with parades by its armed forces and speeches by political and military leaders.

At a ceremony at the mausoleum of the late Ayatollah Khomeini, President Rouhani declared, “Our neighbors should know that Iran’s Army and Armed Forces are supporters of stability in the entire region.”

Rouhani continued, “There is no doubt that Iran with such brave sons will never allow any aggression against its soil.”

Fighters, bombers, and helicopters flew over the crowd as the units of the Islamic Republic’s army, founded on this day in 1979, marched past the reviewing stand.

Mehr has posted 82 photos of the parade. 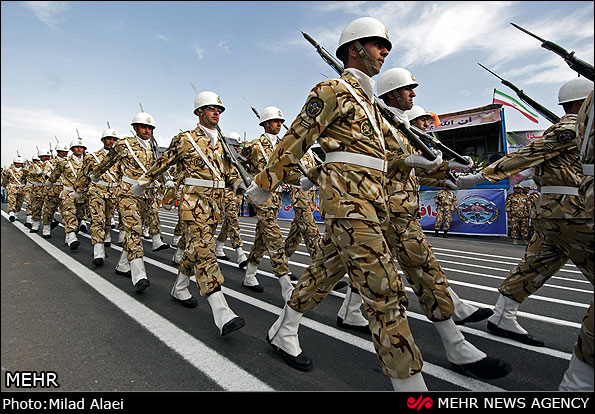 President Obama has signed into law a ban on entry to any UN ambassador whom the US says has engaged in “terrorist activity”.

The legislation is aimed at Iran’s new Ambassador to the United Nations, Hamid Aboutalebi.

Congress adopted the measure after critics said Aboutalebi was prominent in the 1979 takeover of the US embassy in Tehran, in which 52 Americans were held for 444 days.

The State Department has already denied a visa to Aboutalebi, a career diplomat who has held posts throughout Europe.

Obama said, “I share the Congress’ concern that individuals who have engaged in such activity may use the cover of diplomacy to gain access to our nation.”

However, he said he would treat the law “as advisory in circumstances in which it would interfere with the exercise of this discretion”, as it could effectively curtail his power to receive or reject ambassadors.

The opposition website Kalemeh claims that political detainees in Ward 350 of Evin Prison have been beaten, with several seriously wounded.

The website said prison guards and officers of the Intelligence Ministry and Revolutionary Guards attacked the prisoners on Thursday morning, following a protest over “an aggressive inspection program”: “More than 30 prisoners were injured and at least four inmates were taken to a hospital outside the jail because they were bleeding or sustained fractures.”

Kalemeh said 32 prisoners were then transferred to solitary confinement.

The head of State Prisons, Gholam-Hossein Esmaeili, denied the clashes, but Reporters Without Borders said it had information from sources in Iran that guards used “extreme violence, smashing TV sets, equipment and personal effects” and called on United Nations officials to investigate the “grave violations of the rights of political prisoners”.

Araghchi said that a leaked audio tape of his remarks was “incomplete” and “taken out of context”. He maintained that “the letter that President Rouhani sent to the Supreme Leader mentions the continuation of our right to enrich uranium”.

The Deputy Foreign Minister advised members of the media “to not sacrifice national interests and the nation’s nuclear rights for their own short-term political goals.”