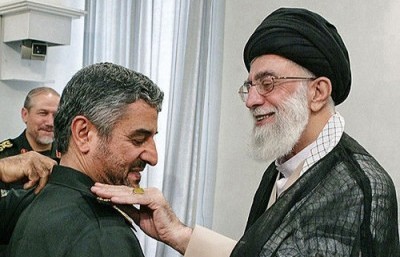 Continuing their manoeuvres as the Rouhani Government tries to establish authority, the Islamic Revolutionary Guards Corps — apparently supported by the Supreme Leader — have put out a declaration against any “secular” leadership.

General Yadollah Javani, the Supreme Leader’s representative in the Guards, said on Thursday:

We have unfortunately witnessed many attempts in the past three decades to establish a secular government and permeate its values in society….We must be vigilant so it is not permeated in society the slogan of religion’s separation from politics. We should take steps in this regard with precise and coordinated planning.

Defying President Rouhani’s injunction to stay out of politics, the Guards have been vocal about the need to push back attempts for “cultural openness” and to maintain their political and economic role in the Islamic Republic.

In the later years of the Ahmadinejad administration, the Guards traded accusations of corruption with the President.

Gasoline Prices Up 75% After Subsidy Cut

A queue of cars trying to buy gasoline before the price rise:

Meanwhile, the Rouhani Government may face trouble trying to reduce the Government’s costs as it introduces the second phase of the subsidy cuts. Its effort to persuade the well-off to give up support payments — about $18 per person per month — is not being welcomed by many.

About 73 million people, 95% of Iran’s population, have registered for continued payments, at a cost of about $1 billion per month to the Government.

Calls Continue for Investigation of Beating of Political Prisoners

Leading reformist politician Mohammed Reza Aref, a member of the Expediency Council, has called for an effective enquiry into last week’s beating of dozens of political detainees in Evin Prison:

There is a lack of transparency in this unfortunate incident. Officials will clarify the incident and submit a detailed report…the perpetrators of this incident should be dealt with seriously, and we hope that society and the system which always respects the rights of its people, will emphasize this as it relates to this incident.

More than 30 political prisoners were injured last Thursday, four of them seriously, when they were attacked by guards and Intelligence Ministry officers after a protest over “aggressive inspections”. More than 30 were then put into solitary confinement.

More than 400 civil and political activists have written an open letter to President Rouhani to set up a “truth commission” to investigate the incident:

As members of civil society and political activists, we request that you take a stand against tyranny and injustice against the children of this land within the framework of the law and with the powers you have received by the vote of the people and make an effort to empathize with the victims of these incidents….

By doing so you would be responding to the public’s demands and removing a tumor before it grows and becomes deadly….

By forcing all those who had a hand in this incident to voluntarily resign or apologize, you would be setting an example for other officials.

Detained opposition leader Mehdi Karroubi “is in good health”, according to his wife Fatemeh.

Fatemeh Karroubi made her comments to Hadi Khamenei, the reformist brother of the Supreme Leader. She said that Karroubi has “taken advantage of the open air and sunlight throughout the day” since he was moved from an Intelligence Ministry safe house to their own home, and that he has access to State TV and the newspapers Hamshahri and Jam-e Jam.