Iran: How Country’s Top Gadget Bloggers Wound Up in Prison 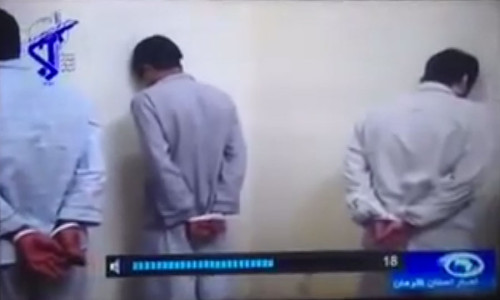 Last December, we wrote how Iran’s leading technology website Narenji was shut down by authorities, with several of its staff and those of other sites arrested.

Four months later, despite the Rouhani Government’s proclamations about opening up the Internet to Iranians, almost all are still in prison and Narenji is still off-line.

Narenji (“Orange”) was Iran’s top website for gadget news, edited daily by a team of tech bloggers who worked from a cramped office in the country’s city of Kerman. The site was targeted at Iran’s growing audience of technology enthusiasts. Like Gizmodo or Engadget in the United States, it had a simple but popular formula: mixed reviews of the latest Android and iPhones, summaries of new Persian-language apps and downloads, as well as the latest Internet memes (such as the ever-popular “An Incredible Painted Portrait of Morgan Freeman Drawn with a Finger on the iPad“).

But now it’s gone. Narenji’s front page is stuck in time as it was on December 3, when the entire Narenji team was rounded up by Iran’s Revolutionary Guard and thrown into jail. Frozen, too, are Narenji’s sister sites — Nardebaan and Negahbaan — that the start-up was beginning to build from Narenji’s earlier success.

Narenji’s founder Aliasghar Honarmand and senior editor Abbas Vahedi had some reason to be excited for the future. The current President of Iran, Hassan Rouhani, has made encouraging tech entrepreneurism as part of his government’s platform, with a $1 billion innovation fund for developing the “knowledge economy”. His government has also worked hard to negotiate to lift Western sanctions against the country, boosting the economy and allowing more gadgets to reach Iran’s middle class.

Here’s the video, broadcast on Iranian state television, of the Narenji team being detained:

The report stated that the bloggers had been funded and trained by “espionage networks…aiming for a ‘soft overthrow’ of the Iranian regime.”

It seems that the Iranian prosecutors believed that one or more of the team had received journalistic training from the BBC while in London, and this was enough to trigger the crackdown. While other bloggers in the same round-up have been released, the majority of Narenji’s team are still behind bars, including:

Of these, only Vahedi and Nozari were recently released on bail, with the expectation that they and the others will face a court hearing next month.

The Narenji team’s treatment is another example of how technologists are targeted by governments worldwide as a result of their work. It doesn’t matter if you’re writing a blog about Android development or distributing anti-censorship proxies: to many governments, simply being well-known online or having a latent power to influence or change society through your technical knowledge can quickly turn you into an unacceptable threat to the social order.

Popular but apolitical bloggers like Narenji’s also risk being caught in internecine battles over which they have no control. Iranian political experts we’ve spoken to consider that Narenji’s arrest by the local Kermani Revolutionary Guard may be a deliberate response by local radicals against the Rouhani administration’s encouragement of tech entrepreneurs: a signal that makes clear that Tehran should not go too far in its moderation. Narenji’s high visibility may not have given them protection against the Revolutionary Guard; rather, it may have made them more of a target.

Predations on the technical community have a long, sad, history. EFF’s own birth began with an ignorant and fearful crackdown marshalled against hackers in the United States; politically-motivated prosecutions of techno-activists like Aaron Swartz continue to this day. If we’re to stop them from taking place anywhere, whether in the United States, Iran, or Russia, we need to unite to protect and publicize the unjust detention and intimidation of technologists everywhere.

You can help by signing this petition to the Iranian government to release the Narenji team, or raise awareness of their case on social media, using the hashtags #Narenji and #نارنجی. More importantly, spread the word of their case among your own community. The more publicity Narenji gains from ordinary people, the greater the likelihood they will be kept safe in jail, and treated quickly.