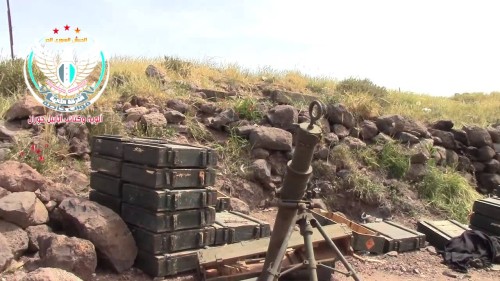 LATEST: Videos — Airstrikes Amid Regime Offensive Against Mleha Near Damascus

While Syria’s military consolidates its position between Damascus and the Lebanese border, insurgents continued to advance on the southwestern front, taking a key military position on Thursday.

Opposition fighters claimed the hilltop position of Brigade 61, the most significant Syrian base between Quneitra and Daraa Provinces, in Tal al-Jabiyah.

The insurgency now holds much of Daraa Province and almost all of the Quneitra countryside, bordering the demilitarized further establishing a “patchwork war” in which each side claims its areas of strength.

Insurgents have been pursuing the “Echo of Anfal” campaign since last month, complementing the Anfal offensive in Latakia Province in western Syria.

The strategic importance of Quneitra is just like the importance of other provinces in Syria—it is part of our homeland—and also that it is close to Damascus. Our most important goals are to control the artillery bases and the hills, from which the regime is shelling civilians; after that we’ll liberate all the other areas. A general commanding the campaign said this week:

The strategic importance of Quneitra is just like the importance of other provinces in Syria—it is part of our homeland—and also that it is close to Damascus. Our most important goals are to control the artillery bases and the hills, from which the regime is shelling civilians; after that we’ll liberate all the other areas.

Videos: Airstrikes Amid Regime Offensive Against Mleha Near Damascus

Aftermath of airstrike on Mleha, east of Damascus:

Fire and damage from missile:

Insurgents blow up a building to prevent its use by regime forces:

The Syrian military, pursuing an offensive in the East Ghouta area, has been trying for weeks to push the opposition of the town.

A protest in the al-Fardous neighborhood of Aleppo on Friday calling for the Islamic State of Iraq and as-Sham to leave Raqqa, the largest city outside the Assad regime’s control — “Purge Al-Baghdadi’s Gang From Raqqa”:

Repeating its information strategy from last summer, the Russian Foreign Minister has denied claims that the Assad regime is pursuing chemical warfare.

The Ministry said that accusations of the use of chlorine gas by the Syrian military over the last month are fabricated.

Videos and witnesses indicate the regime dropped cholorine gas canisters, inside barrel bombs, on Kafrzita in Hama Province on April 11. The attack killed at least three people and injured 200, according to local journalists.

The Syrian military has also been accused of chlorine attacks near Damascus and in Hama and Idlib Provinces since late March.

However, Moscow said the allegations should not be treated as reliable. Instead, they should “make one think about the real goals of its initiators who keep trying to find a pretext for using force against Syria”.

Russia used a similar strategy to try and deflect blame from the Assad regime for last August’s chemical weapons attacks near Damascus that killed hundreds of civilians.

The Friday protest in Kafranbel in northwest Syria offers its comment on the June 3 election:

Video: Casualties After Barrel Bomb on Karam al-Bik in Aleppo

Scores of civilians have died in and near Aleppo this week from the regime’s barrel-bombing.

Civilian deaths spiked on Thursday, with the Local Coordination Committees reporting 128 people killed across the country.

The toll included an estimated 30 fatalities from a regime airstrike on al-Atarib, west of Aleppo.

Of the deaths, 62 were in Aleppo Province, 29 in Daraa Province, and 17 in Damascus and its suburbs.

Ten women and 15 children were among those slain.

Two MPs Say They Will Run in Presidential Election

Two Syrian MPs have said they will campaign for June’s Presidential election.

Legislators and State media hailed the announcements as a sign of “pluralism” in Syrian politics. The challengers would be the first-ever to President Assad, who won seven-year Presidential terms in referenda in 2000 and 2007.

Assad will not face a candidate from the Syrian opposition outside the country: even if one was put forward, a new electoral law requires any challenger to have lived in Syria continuously for the 10 ten years and to win the support of 35 of 250 MPs.

UN Secretary-General Ban Ki-Moon and mediator Lakhdar Brahimi have said the election will be “a huge blow to a political solution”.