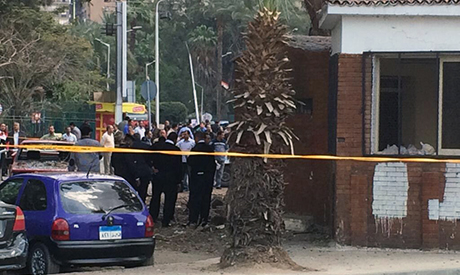 A police-brigadier general has died and five others have been injured by two explosions at Cairo University on Wednesday morning. The blasts caused part of a building to collapse and some departments are being evacuated.

Student supporters of former President Mohamed Morsi and the Muslim Brotherhood continue to clash with security forces, following last week’s ruling by a Cairo court sentencing 529 Muslim Brotherhood members to death. The tension has been further fuelled by Abdel Fattah El-Sisi’s announcement that he will run in the presidential election, expected next month.

Throughout the Arab Spring uprising that toppled Hosni Mubarak in February 2011 and the anti-government protests that marked Morsi’s presidency, who was removed after a year in office in July 2013, Egyptian universities have been key sites of protest.

Two students died in clashes between protesters and police earlier this week at Al-Azhar University in Cairo.

On Tuesday, clashes between students and security forces at Ain Shams University in Cairo resulted in dozens of injuries and the blockading of routes onto the campus by police. Thirty-one citizens were injured in clashes at Al-Azhar University’s branch in the Upper Egyptian city of Assiut.

On March 20, engineering students started a strike in protest at on-campus violence the day before, in which security forces clashed with pro-Brotherhood students.