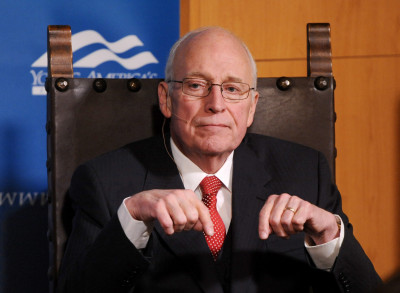 You can’t keep a hawkish US Vice President down.

More than five years after reluctantly leaving office, and despite a suspect heart, Dick Cheney is still looking for bombs to fall on Iran.

The Vice President, who pressed for a military action in 2007 on Tehran, restated his determination to a meeting of the Republican Jewish Coalition last weekend.

There was an impressive line-up of political VIPs at the gathering of the Las Vegas hotel of billonaire Sheldon Adelson, a fervent backer of Israel: former Governor Jeb Bush and current Governors Chris Christie, Scott Walker, and John Kasich.

Cheney dismissed the Obama Administration’s nuclear negotiations with Tehran, and turned to his favored option by recalling a dinner in 2007 with Israeli General Amos Yadlin.

Yadlin was in the Israeli Defense Forces mission in 1981 that destroyed Iraq’s Osirak nuclear reactor, and he was Israel’s head of military intelligence in 2007 when the IDF struck Syria’s nuclear reactor.

Cheney recalled: “He looked across the table over dinner, and he said, ‘Two down, one to go.’ I knew exactly what he meant.”

The crowd laughed and applauded.

His host no doubt agreed heartily: Adelson said in October that the US should show its determination by dropping an atomic bomb in the Iranian desert.