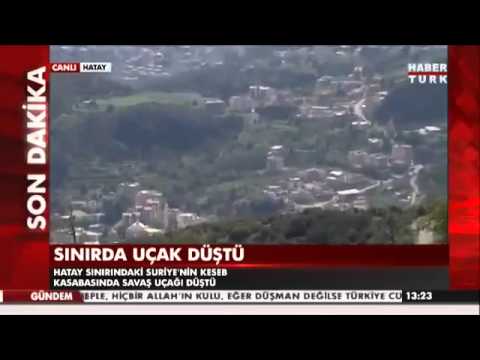 The Syrian jet crashed near the Syrian town of Kasab, close to the Turkish border. where regime forces have been tried to repel an insurgent offensive.

Damascus said the Turkish action was “unprecedented and unjustifiable”. A military source said, “In a flagrant act of aggression that is evidence of Erdoğan’s support for terrorist groups, Turkish anti-aircraft defences shot down a Syrian military aircraft that was chasing terrorist groups inside Syrian territory at Kasab.”

Broadcast on Turkish TV showing smoke from the downed warplane:

Message from the Syrian pilot who survived the crash:

The Syrian pilot who survived after downing his plane by #Turkey in Kasab area "I will return to service in 2 days" pic.twitter.com/zWtE7d0zF9

On Friday the Assad regime accused Ankara of supporting the “terrorist” offensive in Latakia Province in western Syria.

Erdogan said during an election rally in northwest Turkey:

A Syrian plane violated our airspace. Our F-16s took off and hit this plane. Why? Because if you violate my airspace, our slap after this will be hard.