Syria: How to Show Foreign Media A “Truce” — The Story of Tal Kalakh 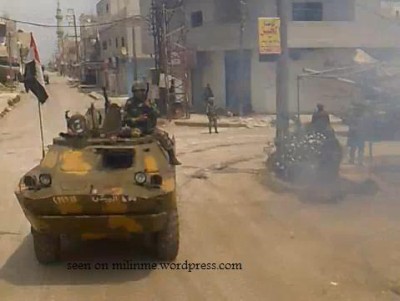 Activist and author Aboud Dandachi writes on his blog, From Homs to Istanbul:

Recently, the Los Angeles Times’ Beirut bureau chief Patrick McDonnell had the opportunity to visit my hometown of Tal Kalakh, under the control of the Syrian army since June 2013. Mr McDonnell was shown around the town by regime officials, and got the chance to interview the ever-prevalent Khalid Eid, a “former commander” in the Free Syrian Army who apparently has seen the error of his ways and effectively switched sides.

Regime representatives in Talkalakh to whom Mr McDonnell talked were eager to portray the current situation in my hometown as being that of a populace “reconciled” with the State, with life returning to normal in the wake of a “truce” that had been in effect since June 2013. Khalid Eid sounded appropriately contrite about his past, but was now happily on talking terms with his loyalist daddy once more, and was even moving forward with his life by “studying law”.

All of which goes to show, that even with complete control over the town and an unhindered ability to present an unchallenged version of events for the benefit of foreign reporters, the regime still can’t seem to maintain a narrative consistent with its past version of events. Liars always end up contradicting themselves, and the regime’s Tal Kalakh Tales 2014 stand in stark contrast with previous reporting on the town by foreign journalists, such as the ever-loyal regime stenographer Patrick Cockburn, and a CNN report from February 2013. Simply put, what we have right now in Talkalakh is not a “truce”. It is a military occupation, by an army that has not once honored any truce.

See What Happened When Regime Declared a “Truce” in Tal Kalakh?

I have written before on the blog about the events in Tal Kalakh leading up to the army’s invasion and occupation of my hometown in June 2013. As CNN reported in February 2013, a truce between the FSA brigades and the regime was attempted earlier that year. It proved to be disastrous for the town’s populace. Over the next six months, dozens of the town’s inhabitants would be killed by regime snipers and shelling, and relatives of fighters were arrested at the many checkpoints ringing the town. In June 2013, the regime felt strong enough to take over Talkalakh in the wake of its capture of Qusair. The truce, such as it was, was brazenly broken, and the town occupied. No wonder the regime’s representatives wanted desperately to hide the fact of those six months from the LA Times.

Today, 90% of Talkalakh’s former residents are refugees or displaced. Even the rosy picture presented to the LA Times couldn’t conceal the fact that the town was largely empty of its inhabitants. There is a reason why Syrian refugees avoid the army as one would avoid a plague of zombies; bad things happen under a military occupation. Like so many other Syrian towns, cities and neighborhoods, Tal Kalakh was left devoid of inhabitants after the Syrian army moved in.

And what of Khalid Eid, the “former FSA commander” who gets trotted out to every foreign journalist who files a report on Tal Kalakh?

Well, Eid was never a commander by any stretch of the imagination. His Facebook profile shows him posing with guns, looking suitably Salafi-like, but a commander he never was. In a town that has been the source of numerous Youtube videos of live-fire engagements, where brigade-leaders make a habit of delivering sternly worded statements from behind desks flanked by scary guys in black headbands and nasty looking machine guns, the only pictures that seem to document Khalid Eid’s less than illustrious days as a “rebel” amount to little more than Eid standing somewhere with a gun, or sitting behind sandbags, or just plain sitting.

In short, despite the regime’s attempts to inflate the importance of his role in Tal Kalakh, Eid was never the guy to take center stage of any FSA YoTtube video. At most, he would have been one of the bearded dudes flanking the guy making the statement. As for his heart-warming tale of reconciling with his loyal-to-the-state father — dude, seriously, we were not born yesterday. We know what happens to any close relative or friend of FSA fighters within the regime’s grasp. And especially what happens to the close relatives of supposed FSA commanders. Colonel Hussein Harmoush, one of the founders of the FSA, saw his entire extended family murdered by the regime, including his in-laws. Malek Jandali, the world famous piano player who attended opposition demos in the USA, had his house burnt down and his elderly parent beaten half to death by Assad’s shabihas. Abdulbasset Sarout, one of Homs’ earliest and most well known activists, had his house burned by the regime and his brothers killed. Hell, Wissam Sara was tortured to death in Assad’s jails just for being the son of Fayez Sara, a prominent Christian member of the opposition Syrian National Coalition.

And yet we are supposed to believe that Abu Khalid was allowed to sit around unmolested by the regime and tut-tut in fatherly disapproval as his former police-man son lead a bunch of hardcore Salafi Takfiris in open rebellion against the state? Some advice for the next foreign reporter to grace my hometown and be presented with Khalid Eid; ask him how his law studies are going, especially in light of the fact that the nearest university to Tal Kalakh is the obscenely expensive Al-Wadi private university.

The LA Times’ article described Tal Kalakh as “as a kind of microcosm of the conflict”. That much is true. And if you want to know why Tal Kalakh and other towns like it revolted, take a trip to the hospital that stands on the western edge of the town. A hospital that due to rampant state corruption, took a ridiculous thirty years to build. And even when it was finished, none of the jobs there went to anyone from Tal Kalakh who wasn’t an Alawite. And when they had run out of local Alawites to employ, the State hired some from as far afield as the coast.

“Neglected” does not begin to describe Tal Kalakh. A town with a pre-war population close to 50,000, it didn’t have so much as a single traffic light. Scant few state resources were ever devoted to the area. The crammed schools had to work on multiple shifts to accommodate all the students. There would be winters with nary a drop of heating fuel in the entire village. While the nearby Marmareta valley would be bustling with restaurants and cafes until the early morning hours, Tal Kalakh pretty much shut down by nine in the evening. It was no surprise that a very high proportion of its sons and daughters would look for employment outside of Syria. When an astonished Saudi commented to my uncle on the large number of young men from Tal Kalakh working and living in Jeddah, my uncle replied that in Tal Kalakh, if you got an education, the first thing you did was go to Saudi Arabia. And if you didn’t get an education, the first thing you did was to go to Saudi Arabia.

After all, it’s not like there was any work to be had at the local hospital.