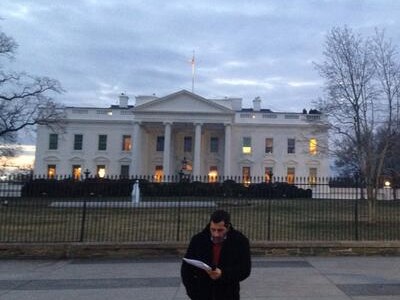 Activists around the world are marking the 3rd anniversary of the start of Syria’s conflict.

The Syrian-American reporter and activist Amal Hanano is leading a protest in Washington. Standing outside the White House, the writer has been reading out the names of the 100,000 Syrians who have died so far in the conflict.

Hanano has been joined by other activists, who occasionally take over the recitation of names, in a show of solidarity with the Syrian people.

People starting to come in from across the country to read #100000Names. My friend from California reading now. He broke down in tears.

A WH guard came to talk to me about our #100000Names memorial. I looked at his name pin and saw he was from Bosnia. I started crying.

The global #WithSyria activist project is encouraging people to mark the anniversary by holding vigils around the world, “shining a light in solidarity with the people of Syria”.

#WithSyria has released a video featuring the work of the graffiti artist Banksy, who has reworked his iconic image of a girl with a red balloon into a young Syrian refugee.