Syria Daily, Mar 15: The Battle Near Adra, North of Damascus 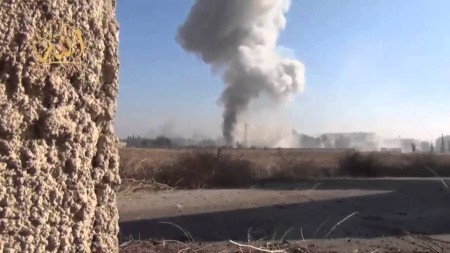 While the Syrian military and Hezbollah pursue their month-long offensive to take Yabroud, northeast of Damascus, they appear to be under pressure from insurgents 30 miles to the south near Adra.

Despite claims by Syrian forces, there was no movement on Friday near Yabroud on the Rima Farms front, where regime and insurgent units have been fighting for weeks. The opposition Shaam News Network claimed “fierce and continuous regime rocket and artillery shelling” on Yabroud — thousands of civilians have fled the city during the weeks of bombardment.

However, sources and videos confirmed that opposition fighters were advancing outside Adra, 12 miles north of Damascus, which they took in December. The insurgents moved on sugar mills used as bases by Syrian forces. Footage showed them inside the complex, and insurgent sources claimed significant casualties on the regime side.

Bombing of one of the mills:

Footage has been posted of the bodies of regime soldiers.

Adra is only 12 miles northeast of Damascus.

Regime Forces Inside Key City of Yabroud After Month-Long Offensive?

Pro-regime Al-Mayadeen TV claims that Syrian troops and Hezbollah are on the eastern edge of the city of Yabroud, northeast of Damascus, after a month-long offensive.

The Syrian military bombarded Yabroud for weeks and fought insurgents on the Rima Farms front east and northeast of the city.

Fighting on the Rima front:

Video: Protest in Qaboun in Damascus on 3rd Anniversary of Uprising

At Least 9 Killed in Fighting in Tripoli in Northern Lebanon

At least nine people have been killed or injured in Tripoli in northern Lebanon, amid clashes between supporters and opponents of the Assad regime.

The fighting eased on Saturday morning following deaths by sniper fire and a hand grenade, but intermittent gunfire continued, especially on the International Highway.

Pro-Assad and anti-Assad factions in the Bab al-Tabbaneh and Jabal al-Mohsen neighborhoods have fought intermittently for more than a year, leaving dozens dead.

Opposition Coalition on 3rd Anniversary of Uprising: “Our Success is Not in Doubt”

The opposition Syrian National Coalition has put out a statement for the third anniversary of the uprising:

Even though our struggle has been long, our success is not in doubt. For four decades, the Assad regime promised immense suffering to all those that opposed it. Our fear of the regime was its most powerful asset. Over the past three years, we have lost that fear. We have faced its worst, and we have survived.

The Coalition says that, with the regime’s rejection of “our efforts and those of the international community” for a political settlement, it is focusing on getting aid to suffering millions and “to pressure the regime to stop targeting civilians and to agree to a transitional process”:

We ask the world to trust the Syrian people. Three years ago, the raw courage of our unarmed activists inspired the world. Our duty now is to honor the sacrifice of the fallen by building the country they dreamed of creating for all our children.

State media said the operation was pre-planned, but Lebanese sources said the heart bypass was carried out after al-Moallem was suddenly admitted to hospital on Thursday night.