Iran: A Political Threat to Rouhani? Introducing the Endurance Front 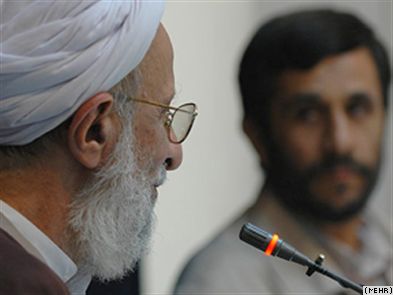 In recent weeks, the domestic opposition to the Rouhani Government has surged, particularly on the cultural front.

Some of the groups challenging the President, such as the Revolutionary Guards and the Supreme Leader’s office, are recognized outside Iran. However, the faction leading the political challenge, the Endurance Front, is a new and lesser-known group.

So who are these hardliners trying to curb and even bring down Rouhani? An EA correspondent in Iran writes:

The Front of the Islamic Revolution, also known as the Endurance Front or the Stability Front, was established on July 28, 2011 by a group of MPs in preparation for the March 2012 Parliamentary elections. Leading members including MP Ruhollah Hosseinian and President Ahmadinejad’s Cabinet such as Gholam Hussain Elham and Kamran Baqeri Lankarani.

The Front’s ideology is shaped by Ayatollah Mesbah Yazdi, who taught most of the members and who is one of the three scholars on the Jurisprudential Council. The Secretary-General of the Front is cleric and MP Morteza Agha Tehrani and the spokesman is another cleric, Saqqa Biria, who was a student of Mesbah Yazdi and an advisor to President Ahmadinejad on clerical affairs. The head of the Women’s Branch is MP Fatemeh Alia, a former nominee for Education Minister, and the head of the Student Branch is Jalal Abbasian.

The slogan of the Front is “Rationality, Morality, and Justice based on Velayat Faqih”, Iran’s system of clerical leadership, and it declares that it stands against both “sedition” and the “deviant current”.

The Front’s media outlets include the 9th of Dey weekly newspaper, under the management of MP Hamid Rasaei, and Raja News. The Revolutionary Guards’ Fars News cooperates with the group.

In the 2012 Parliamentary elections, the Front won 22 seats outright and 39 others in coalition with the Principlist Front, a total of 21% of the 290-member Majlis. It tried to remove Ali Larijani as Speaker of Parliament, claiming he was “silent on sedition”, in favor of former Speaker Gholam Ali Haddad Adel.

Supporters of the Front and students of Mesbah Yazdi are blamed for disrupting the speeches of leading politicians, including former Speaker of Parliament Ali Akbar Nategh Nouri in August 2012 and Larijani in February 2013 in Qom.

Mesbah Yazdi initially supported Lankarani in the 2013 Presidential election, but the effort faded, damaging the cleric’s political position. After Lankarani stepped aside, the Front supported Saeed Jalili, the Secretary of the National Security Council.