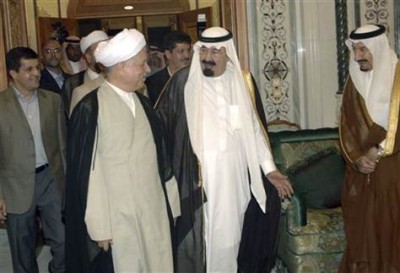 In the most dramatic claim about success for the Rouhani Government’s “engagement” of Saudi Arabia, a risk assessment firm asserts that the Iranian regime has initiated back-channel talks with Riyadh.

The US-based Orient Advisory Group, citing “sources”, says the process began soon after the election of Hassan Rouhani as Iranian President last June. The Supreme Leader supported a personal message from former President Hashemi Rafsanjani to Saudi King Abdullah, sent via Government-to-Government channels. In October, Abdullah responded with an invitation to Rafsanjani to attend the Hajj in Mecca.

Rafsanjani, who pursued improved relations with the Saudis during his Presidency in the 1990s, has led the recent campaign of behalf of his protégé Rouhani. Last summer, he publicized his 1990s détente, and on February 24, he posted a photograph of himself with Abdullah and a transcript of their conversation they had in 2008.

The Orient Advisory Group sees a link between the Rafsnjani posting and publicity a few days later for an Iranian four-point proposal on Syria. The steps included recognition of the global fight against “takfiri terrorism” — a term that Iran has applied to the Syrian insurgency — the provision of humanitarian aid, the revival of comprehensive talks for a political solution, and regional and international discussions on broader issues.

In the past week, in a move which may or may not be related, Saudi Arabia mitigated its support for the Syrian insurgency with the announcement that it is putting the Islamist faction Jabhat al-Nusra on a terrorism list.

Last week, claims circulated that Rouhani would soon announce a visit to Saudi Arabia, after US President Obama’s trip to Riyadh in late March. Last December, during a tour through the Gulf States, Iranian Foreign Minister Mohammad Javad Zarif broached the possibility of his mission to Riyadh, followed by Rouhani’s journey.