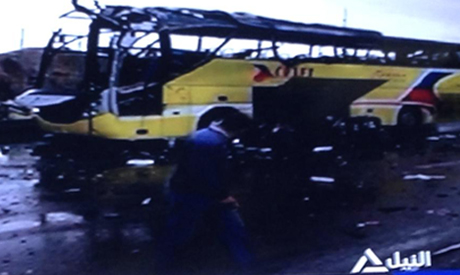 An attack on a tourist bus in Egypt’s Red Sea resort town of Taba has killed at least four.

It is the first terrorist attack on tourists since the January 2011 revolution.

Three Korean tourists and the Egyptian bus driver were killed, while 14 others were injured in the blast on Sunday afternoon, security sources told Al-Ahram’s correspondent in South Sinai.

Most casualties were taken to Taba and Nueiba hospitals, Ahram Arabic reporter Hani El-Asmar said. While the urgent cases were taken to Sharm El-Sheikh International Hospital.

Thirty tourists of various nationalities were on the bus when it was attacked.

The authorities have closed off the international road leading to Taba to search for the perpetrators.

A pattern of bombings and assassination attempts has been growing since Morsi’s ouster.

The main targets have been police and military installations in the Sinai Peninsula.

There have also been an increasing number of attacks in Cairo and the Nile Delta region in recent months.

Ansar Beit Al-Maqdis, an Al-Qaeda-inspired Islamist militant group based in Sinai, has taken responsibility for many recent attacks in Egypt.

The last major attack on tourists in Egypt took place in 2005 when a bomb killed 88 people in Sharm El-Sheikh.

The Egyptian tourism industry, once worth more than a tenth of the country’s economic output, has been struggling to recover since the 2011 revolution.