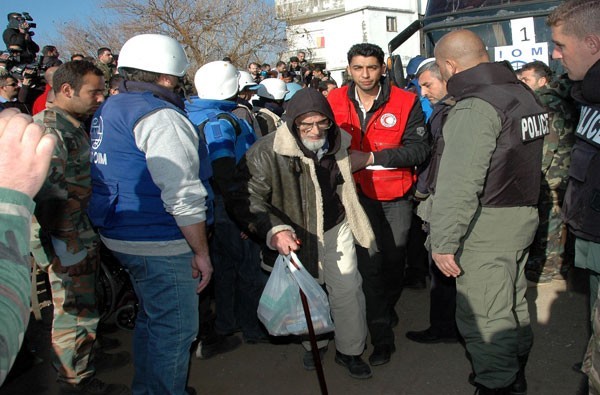 UPDATE 1830 GMT: Aid agencies said about 300 more women, children, and elderly were moved from the Old City of Homs today.

About 600 people were evacuated from the Old City of Homs on Sunday and some food delivered, a day after shelling and gunfire threatened a United Nations aid convoy.

The Syrian Red Crescent said it managed to get 60 food parcels and 1500 kilograms (about 3300 pounds) of flour to the Old City. Footage on pro-regime TV showed women, children, and elderly men getting off the evacuation buses.

A longer video of UN and Red Crescent vehicles arriving in Homs, and the crowds of people waiting for them. At the end, only piles of luggage and a few people unable to walk remain:

A group of 83 people had been moved from the Old City on Friday. The next day, five people were killed amid three sets of mortar attacks, shelling, and gunfire on the UN trucks.

The regime and opposition blamed each other for the assault. A member of the Red Crescent team said Assad supporters had carried out the attacks.

Local activists claimed that pro-Assad militia continued to fire on insurgent-held areas of Homs on Sunday:

The Assad regime, well behind deadlines to hand over its chemical weapons stocks, shipped out a third consignment on Monday and has also destroyed some materials on its territory, according to the Organization for the Prohibition of Chemical Weapons.

Before today, Syria had despatched only 4% of its stocks, as opposed to the 90% which was supposed to leave the country and be destroyed at sea by January 31.

The OPCW did not give the quantity of Monday’s consignment, loaded on a Norwegian cargo vessel.

It did not detail the quantity of material shipped out or destroyed. Until Monday’s announcement, barely 4 percent of Syria’s declared 1,300 tonne stockpile had been removed.

The Islamic State of Iraq and as-Sham, following defeat across Deir Ez Zor Province in eastern Syria, has issued a statement criticizing the Islamist faction Jabhat al-Nusra and “what it has become”.

Jabhat al-Nusra, which has been in a nine-month ideological battle with ISIS, led the fightback against the Iraqi-led group after ISIS took a gas plant, grain stores, and factories last week.

ISIS has been in a fight for five weeks with insurgents including the Islamic Front bloc. Jabhat al-Nusra is on good terms with the Front but had pursued a halt to the fighting last month.

In its statement, ISIS accused Jabhat al-Nusra of allying with deviants and corrupt parties and fighting alongside the “Sahwat”, a derogatory term for Sunni militias.

ISIS reportedly has pulled out of its positions in Deir Ez Zor Province to concentrate forces in Raqqa and Aleppo Provinces.

170 Killed on Sunday Across Syria

The Local Coordination Committees say 170 people were killed on Sunday, including 25 women and 11 children.

Of the deaths, 75 were in Aleppo Province, 24 in Deir Ez Zor Province, 18 in Hama Province, 17 in Homs Province, 11 in Damascus and its suburbs, and 10 in Idlib Province.

Al Jazeera has aired new footage of 12 nuns from Maaloula, moved by insurgents from the town amid fighting in early December.

The regime says the nuns were kidnapped. Insurgents and activists say they were moved for their safety, as the Syrian military shelled the ancient Christian town northeast of Damascus, following its occupation by opposition fighters.

Subsequent negotiations for the return of the nuns to Maaloula have been fruitless, with insurgents reportedly asking for release of prisoners in return.

The nuns say on the footage, shot on February 5, that they are “guests of the Revolutionaries” and Bashar al-Assad is the biggest threat to their lives.