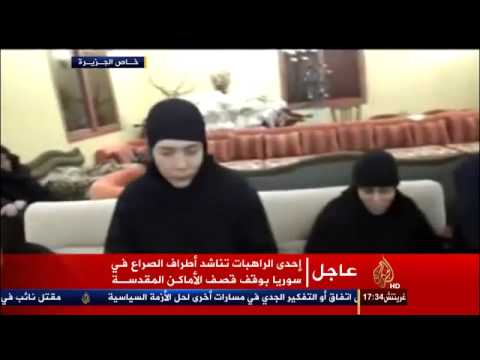 Earlier this month, a story from Maaloula, an ancient Christian town northeast of Damascus, seemed to capture the confusion, propaganda, and politics of the conflict.

Insurgents, who had briefly occupied the town in September, had moved back into the center again and were defying the regime’s attempts to evict them by shelling. A group of fighters were in the Mar Tekla convent, along with about a dozen Greek Orthodox nuns and three assistants.

The Syrian regime claimed that the insurgents had taken the nuns hostage and subsequently moved them to the nearby town of Yabroud. Opposition activists said the fighters were protecting the women during the regime’s shelling and had finally been able to evacuate them.

The story of protection appeared to be supported by the nuns, once they were in Yabroud. They told Al Jazeera that they had been treated well and were hoping to return soon to Maaloula.

Critics of the insurgency maintained that the nuns, who appeared without their crosses, were still being held against their will.

So have the insurgents protected the women from harm? Held them hostage? Or both?

On Friday, US National Public Radio posted another chapter in the ongoing tale, courtesy of a 25-year-old insurgent named Abu Majid, who was in the nuns in Maaloula on December 3 when a missile from President Assad’s forces finally persuaded the women to leave.

Abu Majid, who leads a local group of insurgents, gives a detailed account of the escort of the nuns to safety — a story supported by the Apostolic Nuncio to Syria, Archbishop Mario Zenari.

At the same time, he indicates that the nuns are now being held in the hope of exchanging them for regime concessions — reports indicate that these include the release of female prisoners, and Abu Majid adds the call for Assad to lift the months-long blockade on insurgent-held areas of East Ghouta, near Damascus.

Abu Majid maintains that the insurgents only made their demands after the regime started negotiations through a local businessman.

He says that there has been no response from Damascus to the demand to lift the blockade. and that the insurgents will continue to protect the women: “The nuns are inside the villa. The rebels are outside [fighting Syrian forces].”