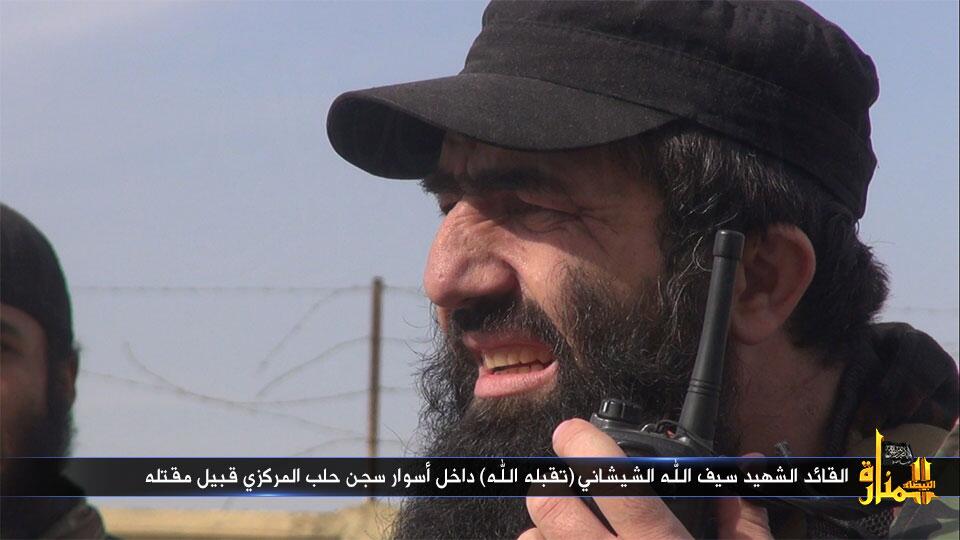 The leader of Jabhat al-Nusra, Abu Mohammad al-Jolani, has made a eulogy to the Chechen fighter Sayfullakh Shishani, killed during the storming of the Aleppo Central Prison.

Sayfullakh and his faction, formerly known as Jundu Sham, swore allegiance to Jabhat al-Nusra in late 2013. Sayfullakh was formerly the second in command of ISIS military leader Umar Shishani.

The knight-hero has left the battle, having carried out the glorious path of jihad from the Caucasus, and ending it in the land of Sham, where he met the heroes of the Caucasus who fulfilled their vow, concluded with Allah, in this blessed land.

History will record with pride today, adding to the great glories of the Caucasus, however, it is written with the blood of the young sons of Chechnya spilled on the earth of the suffering land of Sham.

Sayfullakh fought with all his strength for the liberation of Muslim men and women from the prison of the tyrant, Sayfullakh  performed with perseverance and diligence his intention by demonstrating it in practice; either liberate the Muslims, or martyrdom and Paradise, and we ask Allah to grant him both these things.

Truly, the only condition he gave me before making his oath of allegiance was the assault and liberation of the prison., and he did not want to change this condition for anything.

There were rumors about him that he was characterized by excesses in religion, and I bear witness to Allah that I saw in him only firmness against those who showed excessiveness in religion.

And I really wished, O Sayfullakh, that you would lead the troops who removed the sieges on the people of the Ghouta, and then we would together liberate Damascus, and when I told you that I saw pleasure in your eyes.

And now, after your death, it is as if I hear you say: Do not stop the Chechen mothers from giving birth for the sake of the Ummah to Muslim leaders who will lead them along the best path.