Iran Daily, Feb 13: “We Are Ready for Decisive Battle With US & Israel”, Says Head of Armed Forces 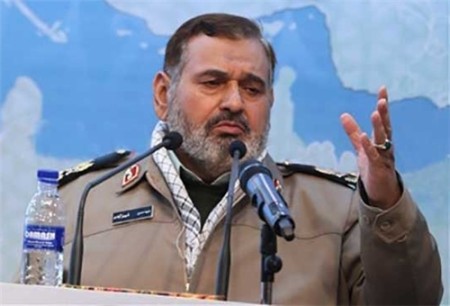 The head of Iran’s armed forces, General Hassan Firouzabadi, has maintained the military’s recent tough-talk campaign, “We are ready for the decisive battle against the US and the Zionist regime.”

Firouzabadi told Fars News, the outlet of the Revolutionary Guards on Wednesday, “If any war is launched against Iran, we won’t give any ground to the enemy and they themselves know this very well…..These words that they utter now are just political bluffing.”

Iranian officials have escalated their rhetoric after a statement last month by US Secretary of State John Kerry that “military options were still on the table” if Iran did not adhere to November’s interim nuclear deal.

Firouzabadi warned, “If an attack is launched on our troops from any territory, we will invade all the possessions of the enemy.”

The message was reinforced by Hossein Sheikholeslam, the advisor to Speaker of Parliament Ali Larijani on international affairs, “Hezbollah has tens of thousands of missiles ready to be fired at Israel.”

Sheikholeslam linked the declaration of strength to Iran’s alliance with Damascus, “The deterrence power of Hezbollah is the result of continued cooperation with former Syrian President Hafez Al-Assad and his son Bashar Al-Assad.”

Trying to keep the upper hand over critics of his approach to nuclear talks, President Rouhani has asked legal experts to analyze the details of November’s interim nuclear deal between Iran and the 5+1 Powers.

The President issued the call in a Cabinet meeting on Wednesday, saying the interim deal was a “great achievement” that owed much to the guidelines of the Supreme Leader and the policies of “the government of hope and prudence”.

The latest on Iran’s mighty “fleet” — a destroy and a logistics vessel which can carry three helicopters — that is supposedly travelling to the “US maritime coast”.

These warships may possibly dock at the coast of Venezuela. In military calculations, a logistic warship and combat warship are not considered threats for almost any country but can have psychological and propaganda affects. The docking of Iranian warships at Venezuela’s coast will strengthen bilateral relations and increase Venezuela’s regional power.

Last weekend a Guards naval commander said the two-ship convoy had rounded the coast of South Africa and was entering the Atlantic Ocean. However, on Tuesday, another commander put the ships in the Gulf of Aden, a retreat of about 2500 nautical miles.

The guards were taken by the Sunni insurgency Jaish ul-Adl, which has carried out a series of attacks since last year in Sistan-Baluchestan Province.

Iranian officials believe the guards were taken across the border into Pakistan. They have summoned the Pakistani Ambassador in Tehran and contacted counterparts in Islamabad over the issue.

State media reports that an Iranian delegation will arrive in Pakistan next week to continue discussions.

IRGC-affiliated media outlet Tasnim News Agency carried an article commenting on the deployment of two Iranian warships to the Western hemisphere: “These warships may possibly dock at the coast of Venezuela. In military calculations, a logistic warship and combat warship are not considered threats for almost any country but can have psychological and propaganda affects. The docking of Iranian warships at Venezuela’s coast will strengthen bilateral relations and increase Venezuela’s regional power.”

In the latest clarification of policy on social media, Culture Minister Ali Jannati has said “the principle” of having a Facebook account is not a crime — however, circumventing filters on the Internet to post one is a crime.

Jannati spoke to Al Jazeera last month about creating conditions for Iranian “to communicate, keep in touch and exchange ideasI think right now many Iranians are using Facebook….Sooner or later this restriction must be lifted.”

However, sources indicate that President Rouhani has agreed with the Supreme Leader — in return for Ayatollah Khamenei’s support of nuclear talks — that the Government will ease its campaign to open the political and cultural spheres.