Syria Video: Was There A “Massacre” By Insurgents in Maan in Hama Province? 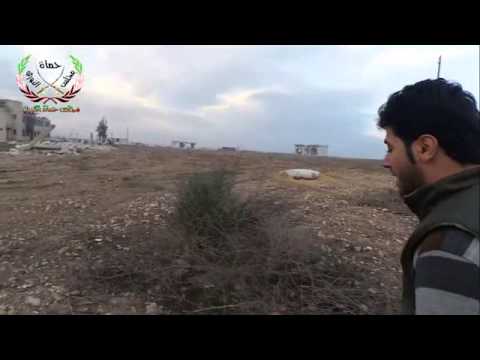 Last weekend we reported on the capture of Maan, in Hama Province, by insurgents. We posted video that showed clashes in the village before the opposition’s victory.

Within 24 hours, State media was claiming a “massacre” of civilians. The Assad delegation at the Geneva II talks used the claim as their opening salvo against the opposition on Monday.

Mainstream press have been spreading the news of at least 20 civilians among 40 dead. However, those reports are almost exclusively based on the claims of the Syrian Observatory for Human Rights — which, as usual for its assertions, provides no sources.

Beyond the SOHR’s “report”, the only evidence that has surfaced so far is from Tahrir Souri, journalists who have posted a photograph of an elderly couple allegedly killed by the insurgents.

See also Opposition Coalition: No “Massacre” of Civilians in Maan in Hama Province

On Monday, insurgents posted this account of the fighting in Maan — the translation is from the Reddit section on the Syrian Civil War:

Opening: Insurgents firing on a helicopter

00:49 [To viewer]: We are now in the liberated village of Ma’an. The rebels seized the town after 24 hours of fighting. The mainstream media, and regime media claim that the rebels committed a massacre in the village. With us, we have some of the rebel combatants who helped liberate the village.

[To rebel] You already told us that the confrontations lasted 24 hours. Could you tell us more about who you faced? What happened during the firefights? And how they started?

01:22 We first circled the village from three axes, we left a single axis open as a corridor for women and children to escape. When the firefights started, the women and children began to leave. When we entered the village we found Shabiha (pro-Assad militia), and women combatants armed with sniper rifles and automatic rifles, grenades too. One of the women took out two of our men, shortly afterwards she was shot.

01:54 The regime claims that a fierce battle took place between its forces and the rebel forces. The regime claims its men that died here. Do these men belong to the regime, or were they locally recruited by them?

02:12 The killed were Shabiha mercenaries, who before our attack on Ma’an, had been terrorizing the peaceful surrounding villages, killing women and children. We did not kill women and children in our attack. We killed Shabiha and Alawites working for the regime.

02:36 When the confrontations were occurring, did the regime shell this area?

02:35 Yes it did, it dropped explosive barrels and fired Grad/Katyusha rockets…despite the presence of Shabiha in the village.

03:25 The regime targeted its munitions depots in the village in order to deny the rebels access to them. The depots were located in these houses, hence their destruction. Shabiha were killed by the detonated munitions since they used the houses for cover.

03:58 Here we are in Ma’an, look at the destruction caused by barrel bombs. That was a school used by the Shabiha as a headquarters. The neighboring houses were used as munition depots. Look at the air force patrolling the skies. We still hear explosions as the regime strikes the area. There are no dead women or children, only the Shabiha we confronted. Two of our brothers were killed when entering one of the houses. A women threw a grenade at them as they entered.

07:06 This was one of the schools in the village, it was used as a barracks.

10:16 We’ve been walking around Ma’an for the past few hours and have seen no evidence of the massacre the media reported. What can you tell us about the issue, and the course of the battle here?

10:41 In the name of God. Peace be upon the Prophet, may he rest in peace. The media has been purposely passing on unsourced reports.

What happened here was this: we overran the village in about 24 hours. We left the Shabiha a corridor in the West for them to leave through. Within the first few hours the women and children had escaped, only the loyalists and Shabiha remained. After overrunning the village, the a majority of the Shabiha evacuated to the village of Samagrah. All who were left in the village were Shabiha and loyalists. The weird thing though was that there were many women among the ranks of the Shabiha. They were well armed, rifles, and offensive grenades. As I said, 24 hours was all it took.

12:05 You mentioned a corridor for them to evacuate.

12:08 Yes, we left a corridor on the eastern front of the village towards the village of Samagrah. The regime had many tanks there, so it helped contain the battle. Why were they defending this village? Who knows. It’s weird. For Bashar (al-Assad)? Then so be it. But like I said, by the time we penetrated the village, all who were left were Shabiha and loyalists. We did not find seniors, children, or unarmed women.

13:01 Were the remaining troops in the village NDF (National Defense Force militia) or Syrian Army?

13:11 The regime soldiers retreated. It was the loyalists who continued fighting to the bitter end.

(Talk about the helicopters dropping barrel bombs, then a quick recap)

(Briefly mentions that three women were captured, he said he’d talk about it in the next video on Ma’an)