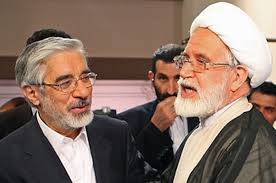 The head of Iran’s Guardian Council, Ayatollah Ahmad Jannati, has declared that the release of opposition leaders Mir Hossein Mousavi and Mehdi Karroubi — in their fourth year under strict house arrest — is part of “America’s satanic plan”.

Addressing seminary teachers in Qom, Jannati linked the detention of the men to protests after the disputed Presidential election in 2009, which gave victory to Mahmoud Ahmadinejad over Mousavi:

Why do some not understand that the [2009] sedition was America’s satanic plan?

Recently, the topic of freeing the leaders of the sedition has been introduced. This is an American plan that some are claiming for themselves.

The [2009] sedition has not been completely eliminated, but its importance has fallen and there are more important matters in the country today.

In two weeks, more than 13,000 Iranians — including Grand Ayatollahs and other clerics, activists, and prominent reformists — have signed a petition to President Rouhani to free Mousavi, Karroubi, and Mousavi’s wife Zahra Rahnavard from their detention.

(Thanks to Iran Tracker for translation)

The US State Department released its annual human rights assessment yesterday, which noted that there has been no measurable improvement in the situation in Iran since the election of President Rouhani.

Uzra Zeya, the senior State Department official who supervised the preparation of the report, stated “There have been some steps, as the release of some political prisoners last fall, but over all I would say the situation remains poor.”

Moreover, the report detailed “allegations of torture, political imprisonment, executions in the absence of due process, which have gone up under this government, harassment of ethnic and religious minorities.”

Electricity Prices to Increase By 25 Per Cent

The price rise comes after President Rouhani declared on Wednesday that forthcoming fuel price increases, spurred by the lowering of State subsidies, will have a “mild slope” steadily increasing throughout the year.

President Rouhani has upheld the campaign against corruption, including prosecution of allies of his predecessor Mahmoud Ahmadinejad.

He said during a tour of Hormozgan Province on Thursday:

Some groups have circumvented national interests in the name of circumventing sanctions. They have taken the people’s money and I hope that all the country’s organs can return this money to the treasury.

Zanjani is believed to have been instrumental in moving revenues from the sale of Iran’s oil, bypassing Western sanctions. He is now accused of owing billions to the Oil Ministry.

Culture Minister Backs Away From Freeing Up Social Media

Culture Minister Ali Jannati has backed away from declarations that the Government will open up the Internet and social media: “We must use (these) but must also consider the judiciary’s considerations.”

In January, Jannati told Al Jazeera, said he was determined to lift bans on freedom of expression: “I think right now many Iranians are using Facebook….Sooner or later this restriction must be lifted.”

Since that declaration, authorities have maintained blocks on the Internet and have banned the daily newspaper Aseman.