Egypt: Government Suddenly Resigns — Is It Paving Way for General Sisi as President? 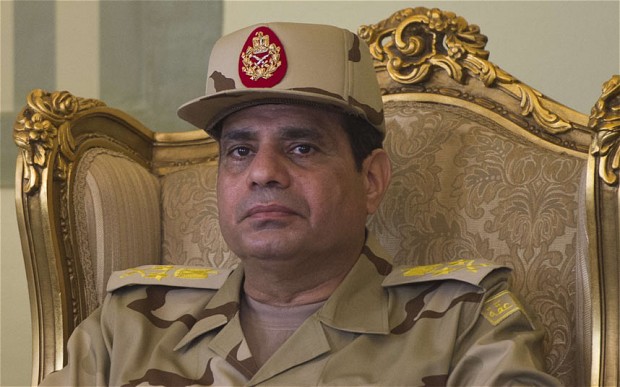 Egypt’s interim Government, installed after a military coup in July, suddenly resigned on Monday after a short meeting. The departure fuelled speculation that the way is being paved for the election of General Abdel Fattah al-Sisi, the leader of the coup, as President next month.

First we post our Video Analysis from earlier this month, “Turning General Abdel Fatteh El-Sisi Into A President“.

Bel Trew of Foreign Policy offers an assessment of the immediate situation, while Joshua Stacher of MERIP for consideration of wider context, including economic and social tensions that may have forced the Government’s decision.

No one expected it. Even some government ministers were not informed. But just a few weeks before Egypt is due to hold fresh presidential elections, embattled Egyptian Prime Minister Hazem al-Beblawi threw in the towel and announced the resignation of the entire military-installed cabinet.

“I only knew about it when [Beblawi] started speaking,” Higher Education Minister Hossam Eissa said in an interview.
Government spokesperson Badr Abdel-Atty was just confused. Asked about the move during a tour of the Democratic Republic of Congo, he said foreign ministry staff had “no idea” why the government quit.

Seven months after Egypt’s top generals overthrew President Mohamed Morsi, Monday’s dramatic decision means the country is once again a rudderless ship. And as the country prepares for presidential elections, in which army chief Abdel Fattah al-Sisi is widely rumored to be preparing his candidacy, nobody can truly say where the country is heading.

This morning Egypt’s military-installed cabinet resigned en masse. Initial comment implies that the resignations were a surprise but nonetheless fit into a pattern of events paving the way for a presidential run by Field Marshal ‘Abd al-Fattah al-Sisi. If al-Sisi does indeed run, the outcome would not be in doubt.

That certainty has not stopped debate over why the cabinet departed this morning and who’s in and who’s out in the next cabinet. Will Prime Minister Hazim al-Biblawi stay or go? Can al-Sisi legally remain minister of defense when he announces his presidential candidacy? Does it matter? Is Military Chief of Staff Sidqi Subhi going to be the next minister of defense? How does the cabinet’s makeup mesh with the personnel shifting and morale building that al-Sisi has led among the top brass since the Supreme Council for the Armed Forces (SCAF) ordered Muhammad Mursi to appoint him defense minister in August 2012? There are endless permutations with which to understand the elite maneuvers.

Today’s reshuffle should not have been a surprise. The first junta-backed government was transitional, a way station on the route to the regime the military wants to make. With al-Sisi’s candidacy, the generals have decided to push all of their chips to the center of the table and try to dominate the increasingly fragmented political order. They probably wish that al-Sisi did not have to run for president and govern directly. But the generals don’t have a better choice for imposing their vision of stability. From their point of view, now is the time for concerted action to resubordinate the state apparatus, redraw the blurred lines between social obedience and dissent, and reorganize what’s prohibited and what’s tolerated. But, rather than declare the junta’s victory, it’s worth remembering that social processes are not inevitable. There are many interactions to come between this regime-in-formation and Egyptian society.

In that light, it is worth reviewing why the generals chose today to reshuffle the cabinet. Biblawi’s announcement of the move focused on how well his cabinet has performed. In his telling, the ministers bravely led a government that battles terrorists and left Egypt in a better place than when they started nearly eight months ago. “In most cases,” the prime minister said, “we have achieved good results.”

But another of today’s talking points reveals a key continuity with the early days of SCAF rule after the fall of Hosni Mubarak. In those days, al-Sisi’s mentor Field Marshal Husayn Tantawi droned on about the imperative not to stop “the wheels of production” with strikes and other “fi’awi” (special interest) protests.

This morning the cabinet announced its resignation against the backdrop of a public transportation strike as well as a garbage collectors’ strike. There are likely other job actions underway. Meanwhile, Twitter and Egyptian newspapers are saturated with reports of cooking gas shortages. Like Tantawi before him, though, Biblawi admonished Egyptians that now is not the time to demand better working conditions, better pay or hot food. “We must sacrifice our personal and narrow interests for the benefit of the nation,” he said.

A cabinet reshuffle was foreordained the moment that the SCAF unanimously put forward al-Sisi’s name as a presidential candidate. The next government will certainly consist of ministers handpicked by the coterie in khaki. But that the reshuffle happened today is a reminder that the timing of these announcements is not entirely at the elites’ initiative. The junta continues to deal with a restive society that it wishes no one would acknowledge as existing. The generals can erect a façade of democracy, replete with constitutions, elections and parliaments, but they can’t make people struggling to be better served by their rulers go away.