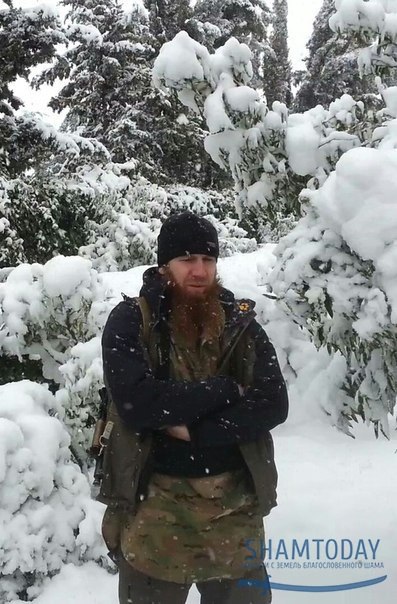 FiSyria, the website close to ISIS’s Chechen Emir Umar al-Shishani, has published new claims regarding ISIS’s movements in and around al-Bab in Aleppo, together with a claimed footage of a weapons cache captured from the Free Syrian Army.

The weapons captured include anti-tank rockets, according to the video.

The new details also indicate that Umar and ISIS had previously tried to purchase rockets and other weapons from the Islamic Front, but were refused.

We now also know that Umar and his men are in the vicinity of Manbij.

Text accompanying the video says it was shot on January 16. The man speaking in the video, who describes the various rockets captured in the base, is not Umar. It is possible that the speaker is Umar’s new right-hand-man, Abu Jihad al-Shishani.

The speaker in the video emphasizes that the rockets were given to Umar and his men by Allah. One of the rockets is described as a “cannon”. There seems to be two Russian speakers, but at one point, the Arabic word for “rocket” is heard.

The post says that after capturing the al-Bab, Umar and his faction set out on the road to Manbij:

The town was completely cleansed.

Two days later, we received information that former Free Syrian Army insurgents were holding ISIS prisoners in one of the bases near the city.

Intelligence reported that this was a former missile base, which previously belonged to Assad’s forces.


Umar and his men decided to attack the base, FiSyria writes:

The attack was carried out at night. The apostates (a term used to refer to non-ISIS fighters) were fortified in two buildings, from where there was gunfire before dawn.

By morning, there was heavy weaponry reinforcements. After several hours of fighting, they left the territory.

Five infidels were killed (the rest managed to escape), there was one martyr among the mujahideen).

FiSyria explains that, after all, the ISIS prisoners were not in the base.

As it turned out later, there were no prisoners here, but by the grace of Allah, we managed to take a large amount of ammunition and rockets.

Umar and his ISIS fighters took the ammunition from the base:

From morning till evening, we took out the trophies. There were so many that we did not have enough cars.

FiSyria offers a quote from Umar, which offers some insight into the previous relationship between ISIS and the Islamic Front:

Umar al-Shishani said: “When we wanted to buy their shells to fight the Assadis, they told us that they did not have any. But Allah Almighty gave them to us. Praise Him alone!”

This ISIS propaganda video from Sunday claims to show an ISIS convoy heading out to Manbij:

The video was uploaded by Abu Yazn al-Halabi, an ISIS-affiliated activist.

Syria Direct report that the fighter sitting in the pickup truck says, “You cannot stand as long as ISIS stands.” “We will set fire to you,” says another.

It is notable that the fighters shown in this video are Arabic-speakers, and are not North Caucasians.