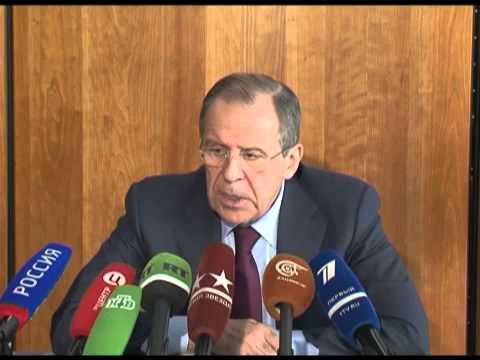 Lavrov is being cautious at this early stage of the conference, and he kept his remarks fairly subdued. However, he did take the opportunity to continue to push Russia’s key lines including that the Syrian opposition is “foreign-backed” and that the armed insurgency is fragmented and consists of several disparate groups; and especially that the Geneva II talks must not include any discussion of regime change.

The Russian Foreign Minister also warned that certain elements of the armed insurgency may seek to prevent humanitarian aid to certain areas of Homs, so as to prevent the Geneva II talks going ahead.

Part of the text of his speech is translated below.

The conference took place as expected. Nobody hoped that during the first and largely ceremonial stage any outline agreements would be reached, not to mention the arrangements themselves. The parties made ​​fairly predictable emotional statements and recriminations. I repeat, this was expected, because the conflict has gone on for three years, and the first contact between the Government and one of the opposition groups, which enjoys the broad support of a number of foreign players, could hardly be straightforward.

The main thing is that both the Syrian delegation, and all conference participants from among the number of ministers invited from about forty countries reaffirmed the need for an exclusively political solution and emphasized the unacceptability of bets on military scenarios, and actively supported that direct talks between the Syrian parties begin early.

These negotiations will begin on Friday, January 24 in Geneva and will last about a week.

However, this will be followed by other rounds. At least everyone talked about this, including the UN, who will coordinate direct Syrian negotiations.

We stressed the need that the provisions of the Geneva communique of June 30, 2012 be followed to the letter. This is the essence and foundation of the Russian- American Geneva II initiative. We warned against attempts to unilaterally interpret the document by one or other section. Our colleagues from Europe, from the region, from the United States, and the Opposition are tempted to interpret the Geneva communique exclusively in the context of regime change. We have focused on the principles outlined in the communique, which involve reaching a mutual agreement between the Government and the opposition, and stressed the need for the entire spectrum of Syrian society to engage in dialogue. This remains to be done.

There is an understanding that during the direct talks between the Syrian parties to this dialogue, other Syrian opposition groups should be involved because the internal opposition is not represented in the negotiations. This is a complex process that involves the solving of a number of political and practical problems. It seems to me that all of our partners, including our American colleagues understand the need to address this issue.

We very much hope that the representatives of the United Nations, as mediators in these negotiations, via Special Representative Lakhdar Brahii, will do their utmost using their diplomatic skills and experience, not just to keep the parties at the negotiating table, but also to encourage them to start, step-by-step, to find mutual understanding. Experts from the US and Russia, as representatives of the two countries that initiated Geneva II will be ready to assist in this process, and help to move stepwise towards the goal of forming a common position for all the Syrian parties regarding how they will live in a country that must retain its sovereignty and its territorial integrity, and in which all ethnic and religious groups should feel free and equal in rights.

Progress definitely needs to move forward via simple and feasible steps, such as those you mentioned: addressing the delivery of humanitarian aid, the exchange of prisoners, and overcoming other humanitarian issues. Regarding Aleppo, we have the feeling that the parties are ready to take concrete steps to deliver food relief and easing the situation of the population of these neighborhoods.

Now we are discussing a similar, but perhaps more acute situation in Homs. Our partners, who have influence over the opposition, have assured us that all groups in the area who oppose the government (there are several) will be willing to agree to humanitarian access. We talked about it with the government delegation. It is important that these agreements were backed by guarantees, because few people can vouch for the number of militants operating in Homs and other parts of Syria. It is very important not to be in a position where Russia will announce some humanitarian action, and then a provocation begins, and things go downhill again. Especially those who want to provoke aggravation, especially to advance arguments in favor of terminating the negotiation process and the return to a military scenario. This is a very dangerous situation, so all the steps that we want to support in order to create and build trust through humanitarian action, need to be carefully calculated.