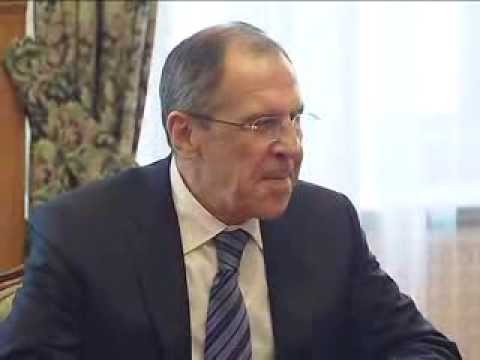 The headline from Friday’s meeting between Russia’s Foreign Minister Sergei Lavrov and his Syrian and Iranian counterparts, ahead of next week’s “Geneva II” conference?

The Assad regime is prepared to work with the Syrian opposition in the “war on extremism”.

The discussion with Syria’s Walid Muallem and Iran’s Mohammad Javad Zarif is being choreographed as Russian support for the Syrian regime to reach out to its opponents. At the Friday morning press conference, Muallem spoke of the possibility of a prisoner exchange, and he and Lavrov put forth the idea of a cease-fire in Aleppo, which has been in military deadlock since July 2012.

Moscow was taken by surprise by this month’s eruption of fighting between the Islamic State of Iraq and ash-Sham and predominantly domestic factions in the insurgency. But Lavrov is now using these developments to argue that the insurgency is not an indigenous anti-Assad movement, and therefore has no legitimacy .

In Moscow’s scenario — supported by Tehran and Damascus — the conflict has been taken over by foreign-backed fighters from outside Syria, hell-bent on transnational jihad and with no right to determine Syria’s future. Instead, it is the Assad regime, bombing towns and cities to fight terrorism, that speaks for the “Syrian people”.

It was this image of the “Syrian people” that Syrian Foreign Minister invoked on Friday, as he told Lavrov he was willing to work with the “opposition” to help combat this “terrorism”, which was being confronted by the Syrian military: “The first desire of the Syrian people’s is to win and to counter terrorism. Therefore, we are ready to cooperate with the other side in order to achieve this goal.”

Lavrov took another line of attack, saying that the extremists in question had carried out atrocities. RIA Novosti reported:

Parallel to accusations against the Syrian government (raised) at a conference in Kuwait, a document was distributed by UN High Commissioner for Human Rights in Geneva. This document provides facts of mass executions, murders and other atrocities that armed militants are carrying out in areas under their control in Syria.

ALL INSURGENTS ARE EQUAL, BUT SOME ARE MORE EQUAL THAN OTHERS

Lavrov’s tactic — far from new — has been to make no differentiation between the Islamic State of Iraq and as-Sham and factions in the insurgency. All are extremist “armed militants”, though ISIS are especially bad:

In Aleppo, Idlib, and Raqqa opposition fighters, especially from the so-called Islamic State of Iraq and ash-Sham, are carrying out mass executions of civilians, starting with journalists, they are shooting prisoners en masse. And there were even executions carried out in a hospital in Aleppo, where militants set themselves us as a military staff.

HUMANITARIAN AID AS A TOOL — A PLAN FOR ALEPPO

Taking into account the role of Russia in stopping the bloodshed in Syria, as well as the relationship of trust between the two countries, I gave Russian Foreign Minister Sergei Lavrov a security plan for Aleppo.

Given that Aleppo is largely under insurgent control, it is not clear how the plan will “ensure the ending of hostilities in Aleppo”. However, Muallem did say that, if the initiative was successful, it could be rolled out to other areas of Syria.

The plan may consist of an attempt to have Geneva II insist on a ceasefire from all sides in Aleppo. It may also seek a proposal to send peacekeeping forces into Aleppo.

Such a plan is probably not feasible. However, in the slim chance it is implemented, it will likely be to the regime’s advantage. And in the far greater chance that it cannot, even its proposal will be used to promote President Assad as legitimate while blaming insurgents as the barrier to “peace”. ,

Lavrov reinforced this during Friday’s press conference with the declaration that the Assad regime was willing to “take concrete steps to alleviate the humanitarian situation in the country”:

We note the willingness of the Syrian government, which has been confirmed by the Minister today, including in response to our requests, to take a number of steps of a humanitarian nature….This concerns specific proposals that have been made ​​for the delivery of humanitarian supplies to villages in East Ghouta, in other areas, including the suburbs of Damascus and Aleppo.

Lavrov’s statement complements the declaration by the Assad regime that it may allow aid into besieged, insurgent-held areas — areas that it is desperate to re-take after months of failed attempts. While the opposition has made gains in an offensive to the east of Damascus, the regime is looking to the southern and southwestern suburbs, where it has been accused of wilfully putting aid agencies in danger.

So Russia and Syria are attempting to muddy the waters over the blame for humanitarian aid failing to get through to starving civilians. Then, as the regime has shown in towns such as Moadamiyya in West Ghouta, control over that aid can break down resistance and allow regime forces to gain access to opposition-controlled areas.

SO WHAT NOW FOR GENEVA II?

Despite all these efforts, Geneva II — assuming it even takes place at all — is little more than a sideshow, a carny act that works because the international community wants some mirage of a political solution to the increasingly desperate Syrian crisis.

Of course, Moscow and Damascus — and Tehran, whose Foreign Minister Zarif has been a useful puppet in the Russian theatricals — are hoping that the conference will go ahead. If it does, they will likely gain political advantage for Assad, despite opposition from states like Saudi Arabia.

But whatever happens in Switzerland will not affect the battles that are taking place on Syrian soil.