Syria: Protests In Kafranbel & Beyond – “Palestinians & Syrians Starve Together” 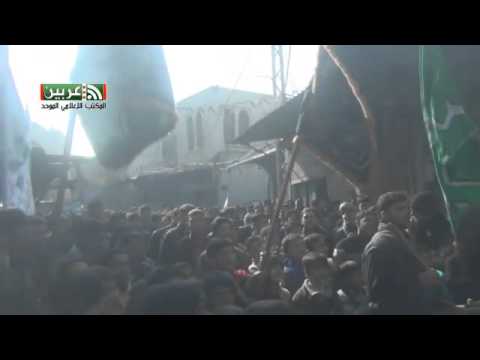 “Palestinians and Syrians Starve To Death Together” — that is the theme of Friday’s protests in Kafranbel and around Syria.

The theme reflects the failed attempts this week by aid agencies to deliver emergency humanitarian supplies to the Yarmouk Palestinian neighborhood in southern Damascus, or to other besieged areas in Damascus and in other parts of Syria.

See: No Aid for Civilians in Besieged Areas Like Yarmouk

In Irbin, in East Ghouta near Damascus, protesters called for Assad to go:

In Kafranbel, the village in Idlib province that has become famous for its hard-hitting and creative protest art and slogans, residents used images to show how the conflict has developed to include starvation as a weapon: 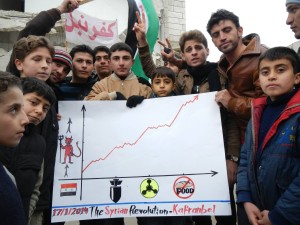 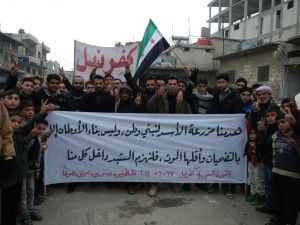 One poster referred directly to the starvation of civilians in Yarmouk: 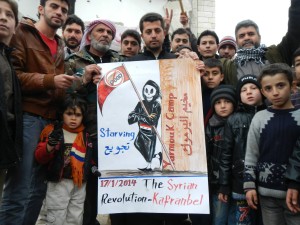 Kafranbel residents also issued a challenge to the participants of the upcoming Geneva II conference, scheduled for January 22. They started the revolution against Assad to regain their dignity and freedom, they said — but would the conference achieve that? 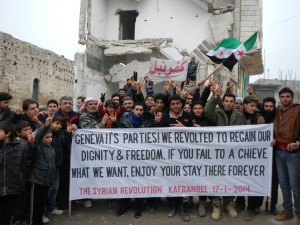 Videos of the protests in Kafranbel: