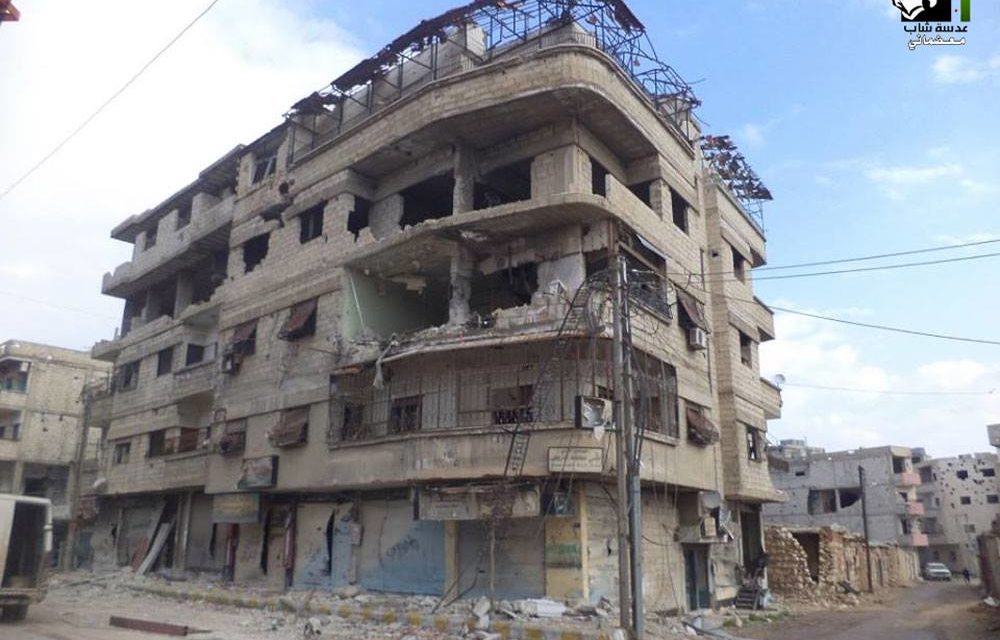 Syria Direct have published an interview with Qusai Zakarya, a citizen journalist from the besieged West Ghouta town of Moadamiyya (Moadamiyyat ash-Sham). Moadamiyya has been subjected to a total regime siege for over a year. It was also targeted by the regime chemical weapons attack on August 21. Several of its civilian residents have died of malnutrition-related illnesses or because they have been unable to obtain medical assistance.

Qusai, who has made Moadamiyya’s plight known, now says he is facing death threats from the regime for his interviews with Western media. 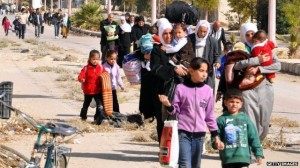 (Photo: Civilians leave Moadamiya in December. Activists say some civilians were interrogated by the regime after leaving the opposition-controlled town)

One of Syria’s most well-known activists is facing death threats for publicizing the story of Moadamiyet a-Sham, once famous for its olive groves and now known as the “starving suburb” of Damascus.

Following a 15-month blockade of Moadamiyet a-Sham, with no food, supplies, medicines or people allowed in or out, the FSA and regime forces on December 26th agreed on a truce that would loosen the stranglehold on the dying town. The blockade includes a total blackout, with no fuel or power since the siege began. Zakarya and other activists rely on generators and spotty satellite connections to upload accounts, pictures and video from the Damascus suburb.

While the warring sides agreed that the truce would allow food to come in, Zakarya says that the regime has not held up its side of the bargain. Only the following has been allowed to arrive to each of the estimated 8,000 residents trapped in Moadamiyet a-Sham: 150 grams of sugar, roughly 350 grams of either wheat cereal or lentils, 500 grams of rice and two pieces of bread.

Zakarya says he has been receiving death threats both by phone and over social media. He is currently staying with “trusted” members of the FSA at an undisclosed location following what he says was an explicit death threat from an aide of Maher Assad, the brother of the Syrian president and head of his feared 4th Armored Division. “If you want the truce to go smoothly, shut up Qusai – for good,” Ghassan Bilal reportedly told a member of the pro-opposition local governing council in the FSA-controlled town.

In recent months, Zakarya and other activists have posted videos of pale, skinny civilians foraging for leaves and grass on YouTube, sparking a debate on the impact of the Assad regime’s collective punishments on innocent civilians.

The strict blockade policy is emblematic of the regime’s use of starvation as a tool of war, activists say. Government forces’ encirclement of rebel-held towns across the country eventually leads to a diminished food and medical supply intended to force civilians to switch sides.

In the case of Moadamiyet a-Sham, the tactic may be working. Some residents, Zakarya says, are in fact shifting their allegiance to the regime.

“I don’t know if I can blame them or not but that’s how it is,” Zakarya wrote on his blog earlier this month.

“The regime is trying to push people to leave the revolution by [promising] more food if they do,” Zakarya said. “They want the town back under their control before Geneva,” he added.