Syria: Moadamiya – “If You Back the Revolution You Will Starve To Death” 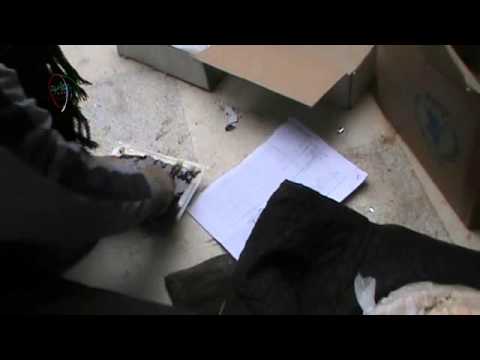 A video from Moadamiya — the West Ghouta town that was the target of one of the August 21 chemical weapons attacks and subject to a brutal regime siege for more than a year — shows the distribution of the latest meager shipment of food from the regime.

Qusai Zakarya, an activist and citizen journalist based in has described the meager food aid the regime provided on December 28 to the town’s thousands of civilians in return for flying the regime’s flag over the town.

The assistance provided enough for one meal per person.

Here’s how I would describe what’s happening in Moadamiya in the past few days. Assad’s so called ‘truce’ is beginning to pay out pretty damn well for him, while all we get in return is crumbs.

Each person’s portion of the assistance consists of:

So that’s what we got after we raised Assad’s flag over our town and handed over a heavy armoured truck, won from the regime during battle. The regime said that they will deliver another shipment of food, but we haven’t seen anything so far.

Meanwhile, the regime is telling the world that food entered Moadamiya and that the problem is solved. In reality, all we got is one meal per person and this is after 15 months of siege and starvation.

The regime is trying to win residents of Moadamiya over by telling them, from under the table, look we can get you food if you return to being loyal servants to the regime, but if you continue to back the revolution you will starve to death. Unfortunately, the regime’s nasty and evil plan is successfully manipulating some people in here. I don’t know if I can blame them or not but that’s how it is.

There’s nothing I want more right now than to spend all day telling the world about the regime’s evil manipulations and to remind them that Moadamiya is still under siege and still suffering from lack of food and medicine. However, it’s been so difficult to find the means to do that. I don’t own a cell phone and the one I borrowed from my friend, had to be returned a few days ago. Now, I work only with a borrowed laptop and very little access to power to help keep the laptop charged. It often dies in under an hour and then I have to scramble to find a source of power to charge it up again. This is one of the reasons I haven’t been able to write a new blog entry for so long.

My bad back is still killing me and the doctor says I need urgent surgery or I might lose the ability to move my left leg.

I also feel I need to mention Assad’s new fashion of hitting rebel held towns with huge barrels of C4. He’s doing all he can, with a green light from the international community, ahead of the Geneva II conference, so that he can be in a strong position to negotiate.

It’s a dirty little world that lets such brave people suffer all this time, and endure all the ways of death on this planet, just because they asked to be free from a dictator. But world silence won’t hold us back, just as Assad evil cannot.

We’ve been resisting for so long and so hard, that some people lose sight of the original objective: to bring down the regime and establish a free Syria. After nearly three years, many brave souls have died, others were captured, fled, or just left and forgot about the revolution. There have been many ups and downs and it’s been a long journey and I think it’s going to take a hell of lot more time and a lot more pain until we get our freedom.

We started this revolution with a few young brave hearts, and I am sure that no matter how few remain, we will finish what we started. So, I’m going to go William Wallace for my ending, but without the skirt and blue paint ; )

“You may take our lives but you will never take our freedom.”