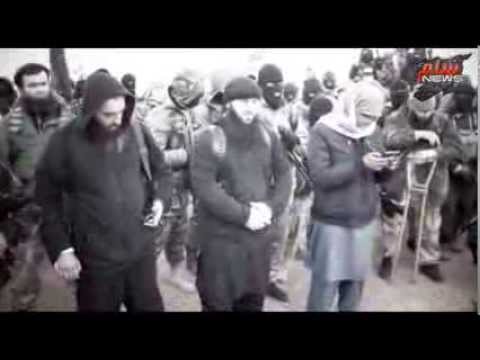 The new leader of the predominantly Chechen Jaish al-Muhajideen wal Ansar (JMA) (Army of Emigrants and Helpers), Salahuddin al-Shishani, has made a video address explaining why some of the faction refused to swear an oath of allegiance to the leader of the Islamic State of Iraq and ash-Sham.

The former leader of JMA, Abu Umar al-Shishani, swore an oath of allegiance to Abu Bakr al-Baghdadi earlier this month, together with a group fighters from JMA, moving their allegiance to ISIS. Following the oath-swearing, there was a great deal of controversy over whether Umar had abandoned his jamaat, prompting Umar to make two video addresses denying that and stating that most of JMA had followed him over to ISIS. Those videos were published on FiSyria, a website close to Umar.

In this video, Salahuddin Shishani does not give the main reason put forth as to why some of JMA refused to swear to Baghdadi — that the North Caucasus fighters had sworn a prior oath to the leader of the Caucasus Emirate, Dokku Umarov. Instead, he emphasizes that JMA fighters were not forced to swear to Baghdadi and that there is no enmity between the groups as a result of the split. Salahuddin also says that those who did not swear to Baghdadi would have to swear a full Bay’at at such time as there was a single Amir ruling the whole of Sham — an implication that, of course, at the current time Baghdadi is not in control of the whole of Syria. However, Salahuddin emphasizes that his group will still fight together with ISIS when needed, even though his fighters are not officially part of ISIS.

The oath to Baghdadi has exposed existing divisions within the community of fighters from the North Caucasus, however. A faction led by Seyfullakh al-Shishani, Umar’s former second-in-command in JMA who Umar expelled last summer on charges of takfir, has fought alongside and likely joined — at least informally— Jabhat al-Nusra in the recent operation to take the Kindi Hospital in Aleppo City.

Salahuddin Shishani’s video was published on the Beladusham site, which is close to Salahuddin. We have translated key points below.

Jaish al-Muhajireen wal Ansar — this was a jamaat and it still exists, alhamdulillah.

On my right is the first naib (a term used for a local leader in the eastern Caucasus and especially Dagestan), Abdul Karim, and to my left is the second naib, Mutasim.

Enshallah, the jihad in Syria is spreading thanks to the will of Allah. Mujahideen from various countries, lands and tribes are gathering in the land of Sham (Syria). And nobody can get in the way of this process, because it is Allah’s will.

And that is the first reason why we are prepared to unite. It is the will of Allah.

The leadership of the Islamic State of Iraq and ash-Sham offered our group Jaish al-Mujahireen wal Ansar to make a full, lifelong Bay’at (oath of allegiance) to them. And part of our mujahideen pledged an oath to Abu Bakr al-Baghdadi. And the rest of the mujahideen refused to make a full, lifelong oath to ISIS, and that decision was made after long, bilateral consideration and consultation with Islamic scholars of Jihad.

Alhamdulillah, every Mujahid has the right to choose. But we have not become enemies because of that. Alhamdulillah, we are brothers, we will all the same unite with them, when they need us, and then we will fight together against the enemy.

We will not be able to refuse to make a full Bay’at when there is a single Amir ruling over the whole of Sham, and then we will swear to him a full Bay’at, enshallah.