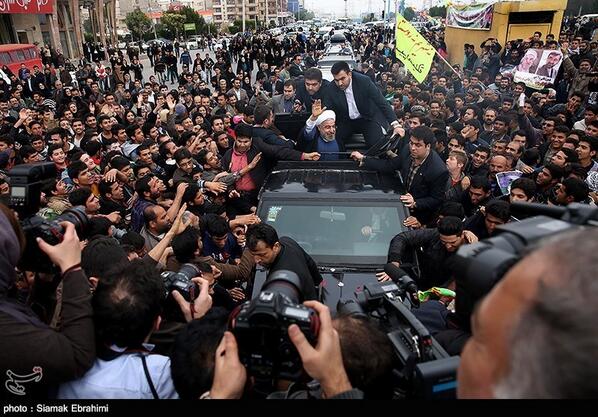 President Rouhani has begun his first provincial tour with a three-day visit to Khuzestan in southern Iran.

Speaking to enthusiastic crowds, he talked in Arabic about economic conditions: “We need migration from bad living conditions to desired conditions; migration from inflation, stagnation, high prices and unemployment to occupation; migration from a society where others have created divisions among us to a united society.”

Far more controversial, at least outside Iran, will be this comment about the interim nuclear deal, whose implementation was agreed with the 5+1 Powers on Sunday:

The Geneva accord means the great powers’ surrender to the great Iranian nation.

Rouhani continued, “We will defend the nation’s rights by relying on divine strength, preserve this country and national interests as soldiers of the front line, and adjust our relations with the world based on the nation’s interests.”

The Iran Prosecutor General Gholam Hossein Mohsen Ejei has criticized Culture Minister Ali Jannati’s recent interview with Al Jazeera English, saying Jannati is “not at the level” to comment on the judiciary’s affairs.

Jannati told Al Jazeera that he would open up social media, including Facebook, and said, “President Hassan Rouhani is making more room for freedom of the press.”

At the same time, the Culture Minister admitted limits on the Government’s scope for change, “Part of these activities fall outside of our responsibilities, and in some cases, the judiciary and courts get involved, and that is out of our control.”

It’s natural that our judiciary needs to come along with the changes that are taking place in the country, and we hope to witness the same changes in the judiciary.

Ejei questioned if the English translation of the interview was right and continued,

If it is correct, Jannati is not at the level to determine the responsibilities of the judiciary….I stress that maybe these words are not his words, but if they are, this issue very much lowers his level, and it appears that it is not appropriate for a political and cultural minister to interfere in another branch like this.

Even if the Minister had been mis-translated, Ejei blamed him for not being wary of questions “biased and provocative against the judiciary”: “If a wise and shrewd [Iranian] official is facing a foreign network, he should not respond to this question.”

Ejei claimed that Jannati said his comments had been “distorted.” He called on the minister to make a public protest.

The Prosecutor General indicated the judiciary would not bow to any demand from the Rouhani Government that it thought improper, as it is not “dependent on the political currents of the day”: “When we say that the judiciary should do a certain thing, do you mean to trample the law and operate according to tastes?”

Foreign Minister Mohammad Javad Zarif has arrived in Damascus for a meeting with Syrian President Assad.

Zarif is visiting Syria after discussions in Lebanon, Iraq, and Jordan and will go to Russia after today’s conversation with Assad.

Iran has been seeking a place at the top table at the January 22 conference in Switzerland to resolve the Syrian crisis.

Larijani: “We Have Extensive Plans in Area of Human Rights”

Senior judiciary official Mohammad Javad Larijani has told an Irish delegation that Tehran rejects Western demands on human rights as imposition: “The Islamic Republic of Iran’s affinity for human rights is rooted in its Islamic and cultural principles and we don’t accept the Western-imposed human rights (principles) which want to change our way of life.”

Larijani assured, “We have extensive plans in the area of human rights and establishment of Iran’s Human Rights Council with such a structure and extent (that it) shows its importance for the Islamic Republic of Iran.”

Poets Fatemeh Ekhtesari and Mehdi Mousavi were released on bail on Tuesday afternoon.

The two were detained in early December as they were about to travel abroad.