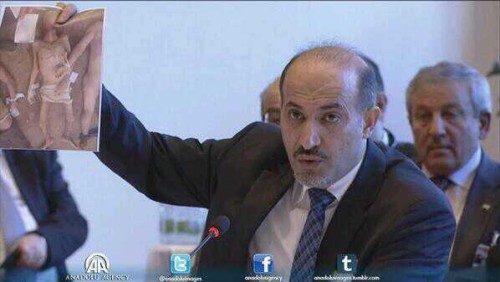 The Assad regime’s Information Minister, Omran al-Zoubi, tries to escape — unsuccessfully — from tough questions by journalists and activists about the Syrian military’s bombing of Aleppo and alleged regime collaboration with the Islamic State of Iraq and as-Sham:

Has Regime Delegation Lost Its Cool in Switzerland?

Expected them to act their most statesmanlike, since their stance has been: we are sovereign, legit, in control, professional, mature… /2

Assad Regime Rolls Out Fighting “Terrorists” Strategy: “Are You Arsonist or Fireman?”

As we predicted, the Syrian regime is trying to turn the Geneva II conference into a fight against foreign-supported “terrorists” rather than a discussion of a post-Assad transition — Bashar Jafari, the Syrian Ambassador to the UN, has set out the line tonight:

Jaafari: all need to end violence, b/c political solution can't go with terrorism. Int'l players must choose: are you arsonist or fireman?

Kerry: “Assad Will Not Be Part of Transition Government”

The opening statement of US Secretary of State John Kerry — one of several uploaded to the UN website — is striking in its declaration that President Assad must leave power:

There is no way – no way possible in the imagination – that the man who has led the brutal response to his own people could regain the legitimacy to govern. One man and those who have supported him can no longer hold an entire nation and a region hostage. The right to lead a country does not come from torture, nor barrel bombs, nor Scud missiles. It comes from the consent of the people. And it’s hard to imagine how that consent could be forthcoming at this point in time.

Kerry also castigated elements of the insurgency, but used this to repeat his call for Assad’s departure:

And as we hear talk about terrorism today, make no mistake: It is the presence of the current intransigence within the existing government that makes this problem worse. That is creating a magnet for terrorists. And until a transition takes place, there is no prayer of reducing the increase of terrorism.

Instead of laying out a positive vision for the future of Syria that is diverse, inclusive and respectful of the rights of all, the Syrian regime chose inflammatory rhetoric.

The fact remains the devastating circumstances created by the regime on the ground in Syria will not be changed by inaccurate words, they will only change through the implementation of the Geneva communiqué, including the creation of a transitional governing body and by the regime taking real, concrete steps to increase humanitarian access and improve the lives of the people suffering the most.

The Exchange Between the UN Secretary-General and Syrian Foreign Minister

The headline from the opening day of the “Geneva II” conference is likely to be the tense exchange between United Nations Secretary-General Ban Ki-Moon and Foreign Minister Walid al-Moallem, after the leader of the Syrian delegation went past the time allocated to his opening statement:

Ban: Can you just wrap up please.

Al-Moallem: I came here after 12 hours in the airplane, I have few more minutes to end my speech. This is Syria.

Ban: How much do you have left now?

Ban: No, no. I will give you another opportunity to speak.

Al-Moallem: No, I cannot divide my speech. I must continue … I will do my best to be fast.

Ban: Can you just wrap up in one or two minutes?

Al-Moallem: No, I can’t promise you, I must finish my speech. … You live in New York, I live in Syria. I have the right to give the Syrian version here in this forum. After three years of suffering, this is my right.

Ban: We have to have some constructive and harmonious dialogue, please refrain from inflammatory rhetoric.

A-Moallem: It is constructive, I promise you, let me finish.

Ban: Within 2-3 minutes please, I will give you another opportunity.

Al-Moallem: You spoke for 25 minutes, at least I need to speak 30 minutes.

A few minutes later, al-Moallem was still speaking so Ban interrupted. The Foreign Minister said he has one sentence left.

Ban asked him to keep his promise.

“Syria always keeps its promises,” al-Moallem replied, triggering approving laughter from the Syrian delegation behind him and a wry grin from Ban.

Davutoğlu: I met Syrian girls born in Turkey. They are terrorists, like 5million Syrian terrorists displaced. We know who the terrorists are

Turkish FM giving impassioned speech responding to Syrian FM,says 'some so shameless after own crimes against people, won't respond to them'

French Foreign Minister Laurent Fabius has called for a cease-fire and the opening of aid corridors, while British Foreign Secretary William Hague has bemoaned the failure to put in place the “Geneva I” agreement — which also called for a halt to fighting and a transitional governing authority — from June 2012:

Nice move. Jarba is giving names and direct examples of Assad's atrocities. No fluffy diatribes with no substance.

Ahmad Jarba @PresidentJarba starts by citing the story of an 11 yo child killed in Homs by regime, then Hamza Al Khatib #Geneva2

Accusing the Assad regime of war crimes, Jarba said 10,000 children have been killed by the Syrian army since March 2011.

The Coalition head turned the “terrorism” label back on Assad, saying that insurgents are fighting “international mercenaries” brought in by Damascus — including the Islamic State in Iraq and Levant as well as Hezbollah and Iran-backed militias.

After chiding Muallem, Ban now gives floor to @PresidentJarba , asks him to lead by example, respect time limit and not launch accusations

Foreign Minister Walid al-Moallem has already raised the diplomatic temperature with a lengthy speech and a bit of defiance of United Nations Secretary-General Ban Ki Moon:

Moualem argues with #UN chief Ban, seeking more speaking time on podium at #Syria talks, "I have the right to give the Syrian version here""

#Syria FM Moallem to UNSC Ban Ki moon: Mr. secretary, U R living in NY, I live in Syria. I should finish my speech. #Geneva2

Moallem accused insurgents of blocking humanitarian aid and “spreading mis-information”. While agreeing on the need for dialogue, he said discussions should take place in Syria.

Responding to criticism of the Syrian regime’s blocking of humanitarian aid, Moallem said Damascus was confronting “foreign fighters”: if the world wanted to ensure assistance reached Syrians, it should “leave [Damascus] be”.

United Nations Secretary General Ban Ki-Moon has opened the “Geneva II” conference, calling on both the regime and opposition to “engage seriously”. He said, “Great challenges are ahead but they are not insurmountable.”

The statement was immediately welcomed by Ahmed Jarba, head of the opposition Syrian National Coalition:

After nine months of effort by the United Nations, Russia, and the US, an international conference to resolve Syria’s conflict opens in Switzerland on Wednesday.

The “Geneva II” conference starts in Montreux because of a gathering in Geneva, where it will move later in the week.

Invitations were initially sent to 30 countries. However, the Assad regime’s ally Iran will not be there, after a dispute led to the withdrawal of its UN invitation on Monday.

The opposition Syrian National Coalition finally decided last weekend to attend, albeit with the support of less than half its members. after saying for months that President Assad’s departure must be a precondition of the conference. Other opposition groups, including the domestic Syrian opposition, and most insurgent factions have refused to go to Geneva.

The Syrian regime has not given way on its insistence that President Assad must remain in power. Foreign Minister Walid al-Moallem said on arrival in Switzerland on Tuesday, “The issues of the president and the regime are red lines for us and for the Syrian people. Nobody can touch the presidency.”

Instead, with the support of Russia, it will try to focus the conference on a primary danger of foreign-supported “terrorism”. Russian Foreign Minister Sergei Lavrov set the stage on Tuesday, “Results of Geneva II should lead to unify the Syrian government’s and opposition’s efforts for eradicating al-Qaeda armed terrorist groups.”

The Damascus delegation, led by al-Moallem, is likely to propose a cease-fire in Aleppo, which has been a military stalemate since July 2012, and some provision of aid to besieged areas.

An attempt at a cease-fire after the “Geneva I” conference in June 2012 broke down, with the opposition and regime accusing each other of not abiding by the terms and co-operating with UN observers.

Syrian forces have maintained blockades on insurgent-held neighborhoods, in some cases for more than a year, and refused to allow aid shipments. Insurgents have cut off supplies to regime-held areas in Aleppo and nearby villages.