Russia: North Caucasus Fighters In Syria Ask “Is It So Hard To Blow Up Saunas In Cherkessia?” 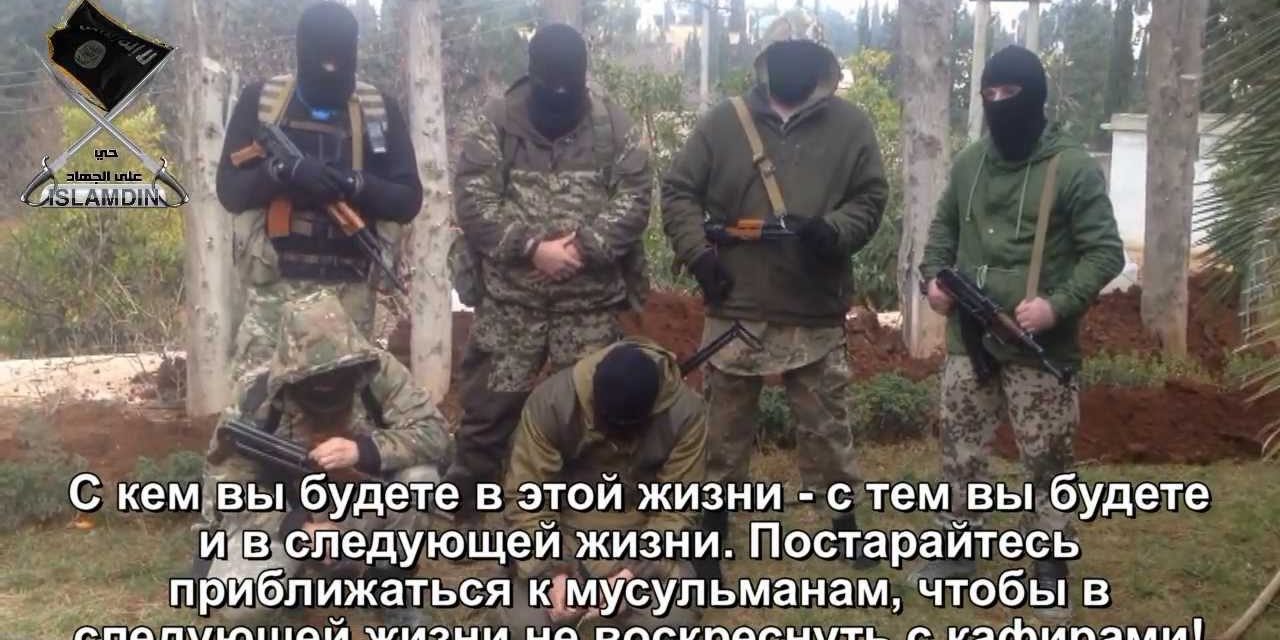 Fighters from the predominantly North Caucasian faction Jaish al-Muhajireen wal-Ansar — formerly led by Umar al-Shishani — have made a video message, addressing the Karachay people of the North Caucasus Republic of Karachay-Cherkessia.

The video sheds light onto some of the complexities of the presence in Syria of foreign fighters from the North Caucasus. While some of these fighters have adopted an ideological stance more aligned to that of transnational jihad, some fighters have retained an ideological or emotional connection to local ethno-nationalist struggles in the North Caucasus, even while discussing elements of these conflicts in terms of a wider struggle by Muslims against “infidel” oppression.

The message comes after a faction from Jaish al-Muhajireen wal-Ansar split from its former leader Umar al-Shishani in November, after Umar chose to swear an oath of allegiance to the leader of the Islamic State of Iraq and ash-Sham, Abu Bakr al-Baghdadi. Some Jaish fighters refused to join Umar, on the grounds that they had already sworn allegiance to the leader of the Caucasus Emirate, Dokku Umarov and therefore retained a loyalty as well as an emotional connection to the struggle in the North Caucasus, even though they are displaced from it.

Who Are The Karachays & Where Is Karachay-Cherkessia?

The Karachay people mostly inhabit the Karachay-Cherkessia Republic in the North Caucasus.

The region which borders the Russian areas of Stavropol and Krasnodar, was taken over by the Russian Empire in the 19th century.

The address by the fighters refers to a mass deportation carried out by Stalin in 1943, when the Karachay people were transported to Central Asia for alleged collaboration with the Nazis. The deportations were part of a wider ethnic cleansing of around one million people from the North Caucasians and Crimea, including the Chechen and Ingush people.

”Is It Really That Hard To Blow Up A Sauna In Karachay-Cherkessia?!”

The video was filmed in Aleppo this month.

Six fighters are shown in the video. The leader speaks in Russian, saying that he wants to give a short message to his people back home. The fighter then starts to speak the Karachay language. He says that the group wants to go home.

The fighters talk about the struggle back home in Karachay-Cherkessia, and call on people in the Republic to wage jihad against the Russians.

While the fighters do situate the struggle in Karachay-Cherkessia within the context of a wider struggle of Muslims, the address remains very focussed on events in Karachay-Cherkessia in particular, and the North Caucasus in general. The fighters are concerned primarily with returning home, and with calling on locals to fight — and not in Syria but in their homeland. The fighters talk about hitting back at the Russian security services, the FSB; they also call on the Karachay people to commit terrorist acts against saunas in the Republic.

The message comes amid heightened security — and heightened tensions — in the region, with Russian President signing a law earlier this month that allows for a punishment of five years in prison for separatist speeches or activities.

Another law designed to increase security ahead of the Sochi Winter Olympics has defined a closed “security zone” in the North Caucasus bordered by Karachay-Cherkessia and Abkhazia, forbidden to anyone without official business.

We have translated the video address below:

Dear Brothers, today we are in Syria. Whatever and however it happened, we inshallah are trying to get home.

We call you, brothers, to go out to Jihad inshallah, because Allah calls for jihad in the Quran.

Today, brothers, such a time has come for our people that they are getting at, beating having a go at our brothers, they’re killing our sisters. Allahu Akbar! We must go out!

How can you watch all that brothers. Allahu Akbar! You must go out today for jihad for sure!

If we don’t go out for jihad now, then we’ll be severely punished by Allah. A hard time has come for our Ummah.


Another of the fighters speaks:

O our Jamaat! I’m not going to add much or little to what’s been said, just that they’re cutting us like prize sheep for their needs. It’s happening at home, and in Dagestan, and everywhere. And we can’t wait and pull on the hope that everything will pass, that it will be passed on to someone else. Why, that’s sinful and shameful before Allah and before people!

Start to excise the FSB from the very fat and the middle and then from all the rest. If they harm one person, excise two of them, if they harm two people, excise five of them.

Don’t gather in large groups in one place. Information gets about in places where there are lots of people. Take care of yourself! But at the same time, don’t feel sorry for yourself!

Strive to do what you can, and do it in the name of Allah. You know yourself what you do. If everyone excised one, then there would be an end to it.

If Allah allows it we will unite with you. Choose a place for yourself and strive to prepare a place for our arrival.

Now it is not the time to gather en masse in one place. Alone, in twos, in threes, you don’t need more than that.

May Allah support you! May Allah join you on your path!

We want to address our older generation. You are helping those red FSB-niks! Do you remember how you were all kicked out of your homes in two days?

You were thrown into wagons and taken to some foreign lands. Most of the people perished in the wagons! Children and old folk were kicked out like dogs!

So quit helping them and help your Muslim brothers and sisters! You should be ashamed! Allahu Akbar!

We’ll all die today or tomorrow, we will all stand before Allah and inshallah everyone who sold us before Allah in that hour will suffer for their crimes!

Don’t help the FSB-niks, those dogs! They are just like dogs in this life and the next and they’re gonna die like dogs!

And then you will understand, who served Allah.

Brothers, we are turning to you, we are doing everything possible for you here. We ask you, do something there!

Blow them up, Allahu Akbar! Is it really that hard to blow up a sauna in Cherkessia? Their attention is all directed here. Work, Allah will make opportunities for you!

Right now, Allah the Almighty is giving such opportunities to the Ummah of Muslims. Come on, Brothers! And may Allah help you!