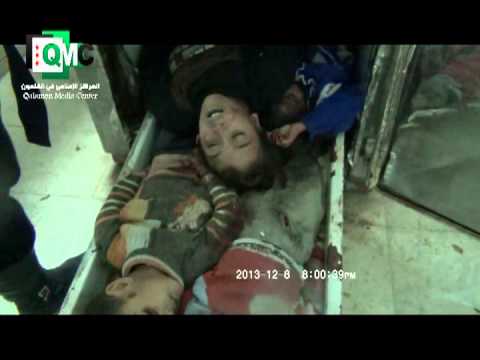 Syria’s State media claimed on Monday that regime forces had captured all of the strategic town of Nabk, but activists and sources say that fighting continues in parts of the center.

State TV aired a live report from Nabk’s main square, showing a reporter surrounded by dozens of people waving Syrian flags. It declared that troops were pursuing “terrorists” on the town’s outskirts.

However, sources said that insurgents from Jabhat al-Nusra and fighters from Homs and Qusayr were still challenging regime forces, who are supported by Hezbollah and Iraqi militias. Al Jazeera also reported that the fighting continued, although President Assad’s troops were advancing in the eastern part of Nabk.

There were more reports of civilian deaths, following the killing of scores of residents over the weekend by airstrikes and shelling and claims of mass executions. Additional video has been posted of children allegedly slain by the regime’s operations.

One woman said, “We came down to the basement here to find this entire family lying dead. They were executed by guns. Each one of them received more than 50 bullets. There are still another five, we are sure they were also executed, but we do not know where they are.”

Civilians were reportedly suffering from lack of medical supplies.

Nabk is one of the largest prizes for the regime in its Qalamoun offensive, seeking to take territory between Damascus and the Lebanese border. The town is near the Damascus-to-Homs highway, which is still blocked by insurgents.