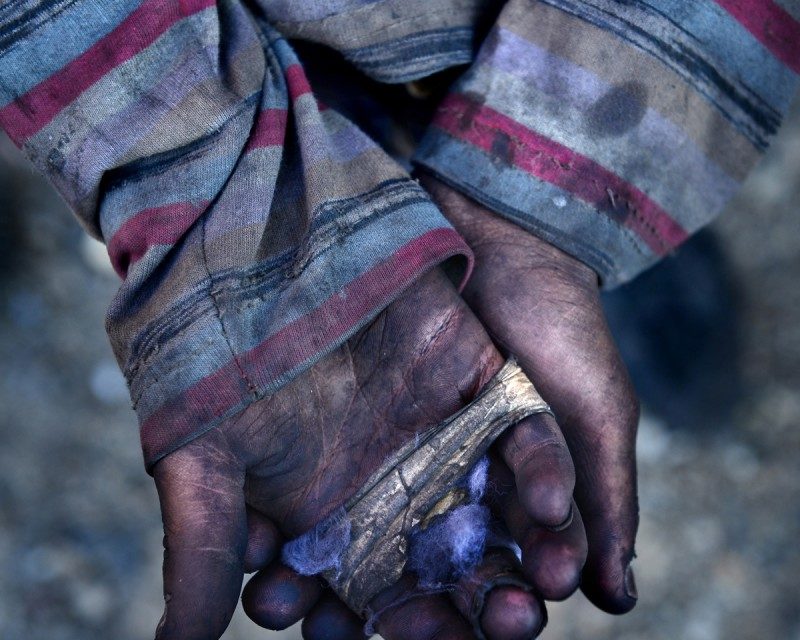 Activists claim that more than 100 people in Aleppo, including many children, have been killed this weekend by regime airstrikes which included barrel bombs.

Journalist Ali El Khalaf reports that at least one of the bombs hit a crowded taxi square in Haydarya.

Aftermath of a barrel bomb in Haydarya on Saturday:

The site of another barrel bombing in Aleppo Province:

The attacks have damaged water supply networks that pass through Hawouz Square. The Red Crescent said three of its volunteers were injured while returning from a mission to fix the networks.

In addition to the more than 100 people killed in Aleppo this weekend, regime airstrikes have taken dozens of lives near Damascus, according to activists.

They claim at least 21 people were killed in attacks on Doumair:

Rescuing people after a strike on Douma:

The United Nations sent its first airlifted delivery of humanitarian aid to Syria from Iraq on Sunday, saying it plans to deliver more food and winter supplies to the northeast in the next 12 days.

The first cargo plane took off from Erbil in Iraq’s northern Kurdistan region for a one-hour flight to Hassakeh Province.

The UN said two planes are contracted to do 23 rotations over the next 10 days. The aid includes 10 planeloads of food, enough to feed more than 6,000 Syrian families for the rest of December.

The airlifts were delayed from last week because of a snowstorm which swept across Syria and Lebanon.

Opposition activists and insurgents are claiming that 12 bodies found in Adra, amid fighting for control of the town, are of civilian workers from Sikhna who were heading home in a bus when they were stopped at a regime checkpoint.

Hassan Abboud, the head of the political branch of the Islamic Front, has condemned an alleged statement by a rival insurgent bloc — the Syrian Revolutionary Front — that it will return weapons and equipment stolen from Free Syrian Army warehouses.

Earlier this month, the FSA warehouses at the Bab al-Hawa crossing on the Turkish border were raided by an armed groups. The Islamic Front says it was then invited by the FSA to protect the premises.

The Front accused Jamal Maarouf, the head of the SRF, of organizing the attack.

In the aftermath of the incident, the US and Britain cut off non-lethal aid to insurgents in northern Syria.

The Islamic Front, created in November, is made up of seven large factions in the insurgency. The SRF is composed of Maarouf’s Idlib-based brigade and more than a dozen smaller groups.

Funeral of Member of National Defense Forces on Saturday

Saudi Arabia: “Britain & the US Did Not Provide Necessary Aid to Insurgency”

Former Saudi intelligence chief Prince Turki bin Faisal has continued Riyadh’s public campaign against the US and Britain’s retreat from support for the insurgency.

He said in Monaco on Saturday:

Since the beginning of this conflict, since the FSA [Free Syrian Army] arose as a response to Assad’s impunity, Britain and the U.S. did not come forward and provide the necessary aid to allow it to defend itself and the Syrian people from Assad’s killing machine.

You have a situation where one side is lopsided with weapons like the Assad regime is, with tanks and missiles – you name it, he is getting it – and the other side is screaming out to get defensive weapons against these lethal weapons that Assad has. Why should he stop the killing?”

18 Stories from the Refugees

This morning The Washington Post publishes a photo-essay with 18 stories of those among Syria’s more than 2 million refugees — and more than 4 million displaced within the country.

Accounts include that of a 7-year-old girl badly wounded, with five relatives killed, by a bomb in Aleppo in July; a woman who gave birth to her 7th child in the Zaatari camp in Jordan; an 11-year-old selling tissues in Turkey to raise money for his family; an 18-year-old woman hit by a regime sniper in Aleppo in summer 2012.

One refugee in the Bekaa Valley in Lebanon says, “We don’t even feel like we’re awake. I ask myself if we’re really here.”

Another: “If we could die, it would be better than this.”

LOPForum summarises the accounts of Syrians dying since December 7 because of extreme cold in Syria and neighboring countries.

Syria Deeply posts a feature on the difficulties for unregistered Syrian refugees in Lebanon.