Iran Today, Dec 15: Supreme Leader Has A Rant About “Irrational” US 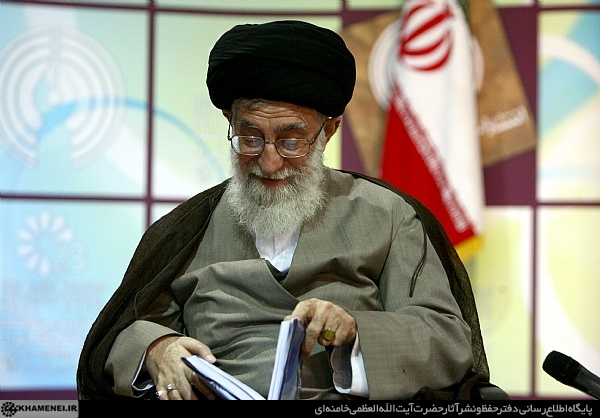 The US Treasury’s announcement on Thursday that it is adding 19 Iranian companies and individuals to its blacklist for support of Iran’s nuclear program sparked criticism from a range of officials and MPs. Tehran’s lead negotiator, Deputy Foreign Minister Abbas Araqchi, said there might have to be a re-assessment of the process for implementing the interim nuclear deal — which only last week had featured four-day technical talks and a visit by the International Atomic Agency to the Islamic Republic.

On Saturday, the Supreme Leader’s office entered the fray, using Twitter to post quotes from Ayatollah Khamenei since February:

The #US government is #untrustworthy, irrational and a #promise_breaker. 5/10/2013

US don’t like nuclear talks reach a conclusion &nuclear disputes get 2an end;if they wanted2 solve it,the solution was an easy one21/3/2013

They say they want to solve their problems w/Iran but in practice they resort to #sanctions and fabricate false #propaganda.16/2/2013

When have they fulfilled their promises?Since 1953,whenever the officials of this country trusted the #US, they were harmed. 7/2/2003

Foreign Minister Mohammad Javad Zarif was more measured in his statement on Sunday morning, “The Americans have taken improper measures in the last few days and we have given the appropriate response to them after considering all aspects of the issue.”

#Iran FM @JZarif: In past days, certain improper measures were taken by #Americans, 2 which we responded in required manner

Zarif said, “Negotiations and achieving results are difficult and will involve many ups and downs. We anticipated this from beginning.”

An interesting contrast in the State News agency IRNA to the series of denunciations from Tehran’s leaders — including the Supreme Leader and Foreign Minister Mohammad Javad Zarif and — of Thursday’s announcement by the US Treasury blacklisting another 19 Iranian companies and individuals for contributions to the Islamic Republic’s nuclear program….

IRNA cites an “expert” who says:

The move is not in violation of the Geneva deal neither in terms of content nor in terms of spirit legally — because what was agreed upon in the Geneva deal is non-imposition of new sanctions and the new bans, from the viewpoint of definition, are the ones devised on a [previous] decision by the US President as an executive order or based on a decision by the US Congress.

In another sign of trouble for the delayed Iran-Pakistan gas pipeline, Tehran has suspended a $250 million loan to Islamabad for construction of the Pakistani part of the project.

Pakistan has yet to begin construction on its portion of 700 kilometers, whereas Iran has completed about 900 of the 1100 kilometers inside the Islamic Republic. Earlier this year Islamabad asked Tehran for $2 billion in assistance to begin its work.

“Pakistani officials were told in recent talks that, given the sanctions, Iran is not in a position to finance the construction of a pipeline in another country and has no obligation to do so,” Iranian Deputy Oil Minister Ali Majedi said on Saturday.

Majedi said Iran told Islamabad to seek assistance from European firms: “Iran’s Oil Minister Bijan Zanganeh has proposed Islamabad gets help from third-party companies to aid and accelerate the completion of the project on Pakistani soil.”

On Friday, an advisor to the Pakistani Prime Minister said the two countries are discussing the technical aspects of the pipeline.