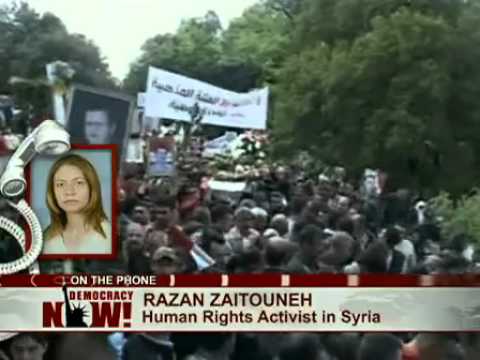 “They took Razan,” blinked the text message from my friend in Beirut. She meant that Razan Zeitouneh and three of her colleagues, all human rights defenders working at the Violations Documentation Center (VDC) in rural Damascus, had been kidnapped. I was shocked.

Razan Zeitouneh, her husband Wael Hamada, Samira Khalil, and Nazem Hammadi had been documenting abuses by all sides in Syria, at the VDC, which Razan founded. She also co-founded the Local Coordination Committees (LCC), a network of civilian local groups that organizes and reports on protests, and the Local Development and Small Projects Support Office (LDSPS), which aims to help provide basic needs and support medical centers. Her work attracted the wrath – and threats – from both the government and opposition groups alike.

“I would rather not be nominated,” Razan told us a few months ago, when Human Rights Watch wanted to nominate her for our Human Rights Defenders Prize. “I am just one of many Syrians who believe that anyone committing an abuse must be held accountable.” Often referred to as the “icon of the Syrian uprising,” she nonetheless blushed and explained that she did not deserve to be singled out.

The VDC office is in Douma, an area in the suburbs of Damascus under the control of a number of armed opposition groups. A joint statement by the VDC and the LDSPS said that “an unknown armed group” had stormed into the office, confiscated laptops and documents, and kidnapped the defenders.

This incident is not just about the distressing kidnapping of four prominent human rights defenders. It is about challenging armed groups in Syria about their motivations: what are they fighting for? What do they want to achieve? This is just the latest example of an outrageous abuse by an armed group fighting in the name of the Syrian revolution, but who have managed to alienate many Syrians, leaving them feeling totally abandoned.

The detention of Razan and her colleagues is a crime. Whoever kidnapped them immediately should release them unharmed. Official representatives of the Syrian opposition, the Syrian National Coalition and the Supreme Military Council should urgently press for their release.

I can almost hear Razan say, in her soft shy voice: “such an act will not stop other Syrians from documenting what they witness, nor will it muzzle human rights defenders.” Just like the arbitrary detention of so many peaceful activists by the Syrian government did not stop Razan and her colleagues from defending human rights.

VIDEO: Razan Zaitouneh in April 2011, a month after the start of mass protests, on the Assad regime’s efforts to “break hope”: